A GUEST CONTRIBUTION FROM ECHORICH 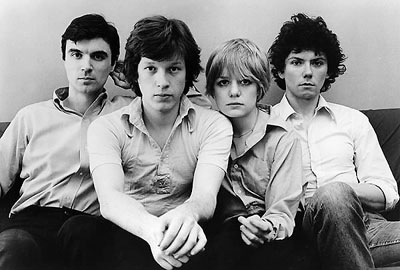 TALKING HEADS ICA – OR THE BAND THAT FELL FROM GRACE WITH THE POP SEA….

Talking Heads are a true foundation of my musical experience.

Growing up in the late 70s NYC, Talking Heads held a certain aura and mystique and offered a true alternative to what was then mainstream Pop and Rock.

David Byrne sang of real dislocation from the expected and “normal” emotions and feelings of society. The band, from the outset was made up of musicians that, to this day, can inspire awe. Byrne’s guitar work is masterful and new, Tina Weymouth’s bass is strong and expansive in its range. Jerry Harrison’s keyboards were often subtle, giving Byrne’s sharp angles some rounder edges and the Chris Frantz percussion was far more than just a metronome to pace their songs.

Their debut, 77 was one of the albums that developed my appreciation for music in ways I find it hard to describe. It opened popular music’s possibilities for me, showing me a band didn’t just have to have one sound, or make records that flowed with a concept cobbled from another art form to be relevant and moving.

Their first 4 albums are very different and equally important in the development of “alternative” pop and rock music entering into the 8os. But then something happened to Talking Heads for me.

By 1980 they were at risk of becoming too big an entity – both in the size of the recording and touring band and in their search for the next sound. Heavy touring from 1979 to 1982 left a band in need of a rethink. What came next, Speaking In Tongues, sounded too much to me like an attempt to be popular. Burning Down The House, while no chart burner, became a radio friendly song that overexposed the band in my eyes. Some of this can certainly be described as sour grapes from a fan who wasn’t ready to share such a closely loved band with the masses, but I think there were also obvious tensions building in the band that would play out over their last four albums. I would find songs on these records I liked, but none mattered in the way the songs on the first four albums did.

Here is my TALKING HEADS ICA built around those first four albums:

The Good Thing – More Songs About Buildings And Food

Many have written of David Byrne’s dissociative tendencies. Some have said it was likely Asperger’s Syndrome, some just say he’s just “a prick.” I think it more a case of his wanting to express his fears, concerns, dreams in the most real way he knew. The Good Thing begins benignly and builds into a defiant growler of a song, laying out a path of life and success that will not be deviated from.

Here we have Byrne in “out of step with everyone and everything” mode. The warped guitar work and wobbly bass are perfect foils to this bit of pop mania.

With each album, the sound of Talking Heads grew and grew. Lots of people want to credit the influence of Brian Eno in these leaps forward, but I think Eno was a real fan and had a lighter touch than many give him credit for. Paper is a monster of political and social paranoia. The musical unit is so tight, it feels like it might break before the first verse of the song is even complete.

Artists Only – More Songs About Buildings And Food

Jerry Harrison is the star of this track, building it out with psychedelic organ that is dark and trippy. Byrne sings as if the mescaline he took has given his entire body an uncontrollable, nervous tick. Tina’s bass and Chris’ drums provide the high speed velocity.

The bass line of God. Psycho Killer is a song that I hold close to my heart. It was less than a year since the killing spree of the Son of Sam killer, David Berkowitz when Psycho Killer came out. I lived not 4 blocks from the next to last of his killing scenes at local discoteque, Elephas, in Bayside, Queens. The events of that killing changed my neighborhood for years. Psycho Killer was the darkest song I had ever heard. The motorik influence of the song brings out the detached nature of the song. Its darkness is still powerful 40 years on.

Life During Wartime – Fear Of Music

Fear Of Music deals with many dystopian issues of society and politics. No song more so than Life During Wartime. It’s a song with lyrics from the margins, underground and clandestine. The urgency of the newly presented Punk/Funk was what got people up on their feet and moving to it. The jam session origins of the song are translated on record into a cohesive, massive sound with the early hints of things to come in one year’s time.

Born Under Punches – Remain In Light

If life was lived in a carnival funhouse maze, then Born Under Punches would be the soundtrack playing over and over as we spent our lives walking into walls and mirrors while we dreamt of our own perfect world. Much of the beauty and complexity to this song and Remain In Light as a whole comes from the likemindedness of Chris and Tina and Brian Eno. They all agreed that the band should make a more democratically structured album and they were all interested in other rhythms and sounds. What came from this and the sessions that followed was a real attempt to fuse Western African Music, Funk and Post Punk – World Music. To this day Born Under Punches manages to raise the hairs on the back of my neck.

Back to the beginning. I feel side two of 77 is a perfect album side, one of the two best perfect album sides in my mind (ok, side two of Ocean Rain by The Bunnymen is the other). The song that anchor’s that special quintet of songs is The Book I Read. It’s a song about the euphoria of love or the realization of love’s affect. Byrne breaks free of his self imposed emotional boundaries and proclaims to the world, or is it all just in his own mind, what love has done for him.

Found A Job – More Songs About Buildings And Food

Where Talking Heads record their own take on a kitchen sink drama. It may be a commentary on modern culture, modern artists or just a narrative about the creative process, but Found A Job is a massive song. Byrne’s frantic guitar is a thing of beauty, Harrison’s electronic marimba is soothing and Chris and Tina bash out a rhythm to keep up perfectly with Byrnes guitar.

The Great Curve – Remain In Light

Sure, I could have given this ICA a real ender of a song – maybe The Overload, where Talking Heads show their appreciation of A Certain Ratio and Joy Division (no one will ever dissuade me of this opinion), or Pulled Up where 77 ends with a feeling of promise and ecstasy, or maybe Heaven – a song that puts Byrnes lyrics on a par with Leonard Cohen. But I’ve chose to end my picks with some New Wave Gospel. The Great Curve has the energy and trance-like abandon of a Gospel Church service. The expanded Talking Heads is taken full advantage here. Adrian Belew’s treated guitar is stand out and Nona Hendryx adds body to the choral portions of the song. Jon Hassell’s horns are tortured and twisted. The song relies on the different lyrical codas being sung as a round and this vocal layering along with the polyrhythms of the music.