A GUEST CONTRIBUTION by FRIEND OF RACHEL WORTH 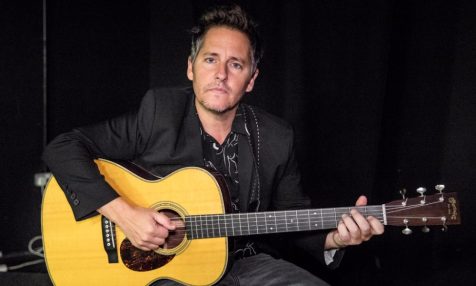 JC writes: – FoRW suggested this as a double ICA but I felt they were more than worthy of two separate pieces.  I’ve kept his intro which is written for both and I’ll be re-producing it tomorrow when the second JR features. Here’s FoRW………..

I’ve never really been into what you would call classic American rock or anything too rootsy. Its only in the last couple of years that the word Americana hasn’t had me running for the hills. Two of the few exceptions are a couple of Joshes that in my mind are forever entwined. I first heard them at roughly the same time with Josh Rouse’s 2nd lp and Josh Ritter’s 3rd lp. Since then subsequent releases seem to arrive at roughly the same time..

They also don’t match the usual profile. Josh Rouse grew up in Nashville but was an anglophile with The Cure and The Smiths his favourite bands. Josh Ritter was largely ignored in his home country and found his audience first in Ireland. For ages I assumed he was Irish and just sang with an American accent. So intertwined in my mind that I’ve ended up doing a double ICA LP. The ICA is from when I first came across them both. Both Josh Rouse’s Dressed up Like Nebraska and Josh Ritter’s Golden Age of Radio (for some reason I never bothered to track down his debut) have some good points but both took a big leap with their next albums.

1: 1972 from 1972 : An ache of a song and a sound that feels anchored in the Californian singer songwriters of the 70s which not long ago would have had me reaching for the skip button. This kicked off his LP 1972 whose summery sounds often concealed a dark heart of lost, lonely, drifting lives. “Could this be all?” . 1972 was his 4th LP and saw him in the middle of a trio of 3 fantastic lps which together could have formed their own ICA.

2: Hollywood Bass Player from Country Mouse City House: After a messy break up Josh Rouse got married and moved to Spain. Thus begin a run a 4/5 lps which were all very pleasant but just a bit chocked full of contentness for my miserable liking.  This one though echoes back to his golden trio of LPs and despite immersing himself in Spanish culture is an American as can get , full of LA finger clicks , claps and “alright”s. Listening to this , feels like we should be right in the middle of glossy film starring a Ryan or two.

3: Miracle from Under the Cold Blue Stars : Josh Rouse’s 3rd LP was a loose concept built around a couple in the 1950’s and the breakdown of their relationship, told from both perspectives. I’ve struggled over the lyrics and I think that the point of view of the 2 protagonists alternates across the songs. Then again I may be a mile wide on this . The concept doesn’t get in the way of the LP being crammed full of great songs. It was this LP that moved him from the one of many to someone who I would start to look out for each new release. This one shows his knack for finding a riff that hooks itself around the catchiest of pop songs. This is the relationship high song before the dark clouds gather.

4: Streetlights from Nashville: The follow up to 1972 (and the 3rd LP in his real purple patch) continued the trend of summery song whilst toning down some of the 70s summer sounds. Right from the slightly meandering intro this is just gorgeous. Its as if he stumbles into the song and before you realise it builds and builds with pedal steel and strings washing over you

5: Quiet Town from Subtitulo: Another one from his run of “contentment” lps. This steers very close to Everybody’s Talking and is another song summer. Even manages to carry off a bit of whistling. A lot of earlier Rouse songs are about characters who are trapped or trying to get out of a town , a relationship or a life. However he we have a middle aged sound of comfortable security and acceptance.

1 Hey Porcupine from Home : Home was Josh Rouse’s 2nd LP and the 1st one I bought on the strength of a review that said it was like a country Lloyd Cole album. The sound isn’t life changing but it is full of songs that gradually worked their way in. There is an echo of a certain kind of late 80s jangly guitar band

2 Ugly Stories from Under the Cold Blue Stars: Well the dark clouds have well and truly gathered and the relationship is only going to end one way. “Unfair , so unkind to have wasted my time on such a silly dream”

3 Directions from Home : the rougher sound of the his 2nd lp is made for shout/singling along to and this track especially has been belted out on many a car journey. A warning , a wake up call , an admonishment or a bit of all 3

4 My Love is Gone from Nashville … “and I sleep with the TV on , its the only sound now love’s gone”

5 Pheasant Feather from the Embers of Time : His last LP (there’s a new one coming later this year) was a return to that sense of melancholy (the strings are still there effortlessly moving things along) and his best for while

“Through the years, been up and down
I’m still in love, but it’s different now
Wish someone would tell me what to be”

The best thing about doing this ICA is that I’ve always wanted to see him play live and despite having all his LPs have never seen him. However, in doing a bit of an internet search I found out that Josh Rouse was playing the Garage in Islington in April , so bought a couple of tickets. The power of ICAs!

Here’s a song whose subject matter is winter time but yet manages to be as sunny, summery and warm as any tune ever recorded:-

Released as a 45 in 2005, it’s a number which evokes memories of The Go-Betweens at their finest and, dare I say it, the jauntier side of The Smiths. The b-side was a live version the title track of his 2002 LP:-