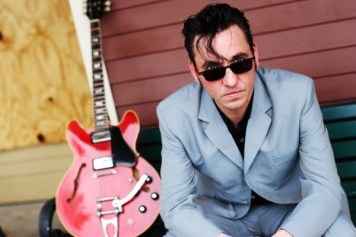 I really have tried but Richard Hawley just doesn’t do it for me.

Jacques the Kipper is a big fan and I’ve usually been smitten by just about everything he’s brought to my attention over what is a friendship stretching back quarter of a century but not on this occasion. I can’t really even explain why. Anyime I’ve read his interviews in the press I’ve found myself agreeing with many of his views and sentiments and let’s face it, the types of songs he writes and performs really should be right up my alley.

I’ve even seen him live, albeit unexpectedly as he was the support act for Tindersticks at a London gig back in October 2003 at a time when his critical acclaim was beginning to grow and a couple of years before the release of Coles Corner got him on the shortlist for the Mercury Prize and brought to the wider attention of the music-buying public. He was OK, although there was one track which stood out for me, and which remains the one song of his I remain fond of:-

mp3 : Richard Hawley – Something Is……

It’s the opening track of the 2001 LP Late Night Final.

I’m not sure if it is possible to try too hard to like someone’s music but I do genuinely feel that I’ve approached Richard Hawley’s work with an open mind but have just felt underwhelmed on each occasion. Maybe the solution lies in the hands of any reader who is a big fan of his….why not suggest what would be the ideal 10-track compilation LP from him and maybe I can try it that way? I’m actually flying out on holiday this coming Sunday and will be putting together some new playlists to enjoy under the Caribbean sun and I’m prepared to try one more time.

Over to you folks.