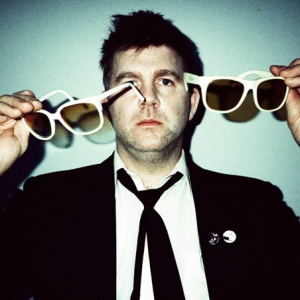 From the fingertips of S-WC…..

A few years back James Murphy, the kingpin behind LCD Soundsystem said that this band are ‘over once and for all’ and I for one was gutted. I think I said before that this is the only band I regret never seeing live. They were great and having earlier this morning dug out all of the tracks by them that I own and played them back to back in order to compile this (five hours it took, roughly) they are still great.

What made them great was the fact that they were genreless, they were DJs, they did songs, techno, dark stuff, rock stuff, pop crossover. LCD Soundsystem transcended the divide by combing dance and punk and I always thought that Daft Punk would have been a better name for them. For what its worth, ending LCD Soundsystem was I think the most selfish decision in musical history, solely because I can never see them live (until the obivious multi million pound reform deal in 2025 to mark 20 years of the release of their self-titled debut that is). Until that reform happens, here is their ultimate compilation.

1. Daft Punk is Playing At My House

This was LCD Soundsystem’s most successful song, earning a Grammy nod and reaching No. 29 on the UK charts. It’s not hard to see why. Murphy always knew how to start a party, from the opening “OW! OW!” to the smashing hi-hats to cowbells and even reminding us that he had moved the furniture to the garage. A belter of a record.

The legend goes that after recording this song, he had to leave the room when the rest of the team listened to it. When he came back in, they all hugged him, to be honest when you hear the line ‘I can change if it makes you fall in love’ I wanted to bleeding hug him. The song reads like a quarrel that he is narrating.

You’ll all know this song but the point where the cowbell clangs and organ buzz that set off North American Scum is one of the greatest moments in recent music history. This is one of the finest anthems of our generation. There is an angry guitar that pushes its way to the front, and as it does burst through, you can’t help but grin at the stupidly brilliant American.

I once saw a man get shot, sorry to get personal on your asses, but I did, I won’t go into details, but it wasn’t pleasant, I didn’t know the chap I was literally waiting for a bus. The next morning around three am I woke up in my room after about two hours restless sleep. I switched on the iPod and this song came on – and the lyric ‘To tell the truth I saw it coming, the way you were breathing, but nothing can prepare you for it, the voice on the other end’ made my eyes sting. Not because its about death but because everything felt like a dream until about six seconds after that line was delivered.

The first LCD Soundsystem I ever heard. I was hooked straight away. The perfect end to any compilation of their music. It twists and winds and bleeps and whirls and just explodes.

The one thing about LCD Soundsystem that frustrated everyone was their reluctance to write ‘hit records’. They never got played on the radio, not the shows that sell records anywhere. This track was another raised middle finger to the industry, an eight minute raised middle finger of a single. It kind of wobbles along at half volume and includes a flute – A FLUTE – instead of a crashing beat or bass that you kind of expect and then suddenly it bursts and goes on for eight minutes. Plus and perhaps the main reason it is here – The Muppets are in the video for it, and it is the greatest music video ever made.

Murphy hates this song, and yet it is clearly their greatest moment. He thinks it is too poppy and embarrassing. It is certainly the most romantic song he ever wrote. I have always thought it is widely reminiscent of ‘Ceremony’ by New Order but the call to arms of for his friends ‘If I could see all my friends tonight’ really emphasises the quality of this band and the friendship its members have.

Apparently Murphy wrote this song after hearing DJs in a club playing music he thought onlty he was playing on his club night, ‘I’m losing my edge’ he bleats out – out of time – of the beat, if perhaps to make the point. He lists band after band to try and reclaim his relevance, its tongue in cheek of course, but wonderful all the same.

My point in Side Two Track One is proved here, ‘You wanted a hit/But Maybe we don’t do hits’ sings Murphy in front of a synthesizers and tiny little guitar line. The song simply fades away. Much like that dream of making it big. Also it involves handclaps, and that in a LCD Soundsystem track deserves to be heard.

5.  New York I Love You, But You’re Bringing Me Down

The only closer that was possible, firstly because it was the last song they ever played live (at Madison Square Garden, New York). Secondly because of THAT piano that starts up again after a massive silence near the end of the track. If you have ever been to New York, or if you ever go, take a trip to the Williamsburg Bridge at night – gaze across to Manhattan and you’ll know what Murphy means.

Huge thanks to S-WC for this. LCD Soundsystem are a band I should know a lot more about and I certainly should owm much more of their material than I do. This is a cracking and seamless mix.

The mention of that last gig in New York got me digging into the vaults to May 2011 for this fantastic guest posting from Iain Fenton, a good friend of my good friend Mr John Greer.

The rumours that James Murphy, the architect and brainchild behind New York collective LCD Soundsystem, (and cofounder of DFA Records) was due to retire the band had been circulating for a while and he had been laying the ground for an announcement for some time when finally it came…. on Feb 5th 2011.

There was to be one last LCD farewell gig on their home turf at Madison Square Garden on Sat 2nd of April and billed as the ‘long farewell’ it was to be a 3+ hour show with guests and all sorts of extras and unusual song inclusions.

In the time since Losing my Edge announced LCD to the world back in 2002 they have released three unmissable albums (four if you count 45.33) and numerous classic singles and remixes. No other band in the last 10 years has given me so much enjoyment and after having seen them live a number of times I absolutely had to be there for the final farewell on 02/04!

Tickets went on-sale on 11 Feb at 14.00 UK time which shouldn’t have been too much of a problem as MSG has a capacity of 15.000 and LCD had never played to a crowd of that size for one of their own shows prior to this (James Murphy subsequently admitted that he thought they would fill the venue but only perhaps with a few days to spare). So, 14.00 arrived and Ticketmaster US and the Bowery websites show sold out within 2 mins of going on sale…. WHAT??? How can that be???

The LCD web forum filled with fans complaining that they couldn’t get tickets and some of the band’s friends (not wishing to hassle them) can’t get any either WTF???? Within 5 mins the first scalper tickets appear on E-bay and StubHub with a face value of $80 selling for $1,000.

It’s all kicking off and within a few hours Murphy has posted a long tirade on the website entitled ‘Fuck You Scalpers, Terminal 5 shows added’. In order to screw the scalpers and suppress demand, he has added four extra shows at the 3,500 capacity Terminal Five venue on the 28/29/30/31st of March with details of ticket sale to be announced – Yay, back in with a shout of a ticket!!

Finally on 22 Feb at 14.03 UK time I secured two tickets for the show on 30 March with all four shows selling out quickly but far more of the fanbase had been satisfied and would be at one of the farewell shows.

Well done to James and LCD for adding the dates and listening to the fans (an almost Joe Strummeresque thing to do).

No tickets would be sent electronically or by hardcopy. The only way of collecting your ticket was on the night itself by showing photo ID and producing the credit card that you used for payment – a pretty good way of stopping scalpers in their tracks!

Fast-forward by a few weeks and the 30th of March had now arrived and here we were in NYC already having holiday fun and full of anticipation for the show at Terminal 5 that night. Reviews from the fans on the LCD forum for the previous two shows were absolutely raving and the setlist looked unbelievably mouth watering. After a perfectly executed ticket collection we entered the venue in enough time to catch a bit of Shit Robots support slot. The venue is on 3 floors with plentiful facilities and drinks can be had within a couple of minutes (nothing like Brixton Academy then!) and finding a good position was relatively easy from which to view this historic farewell.

At 9.05, to the walk on music of 10cc’s ‘I’m not in Love’, the final LCD Soundsystem show (for me anyway) was underway. Starting with Dance Yrself Clean the atmosphere was electric, more like a fiesta really with seemingly the whole 3,500 attendees ready to party and celebrate big time. Now, my friends, I have been to more gigs than had hot dinners with the count into the high hundreds and have tasted the atmosphere of many a fine venue including the legendary Glasgow Apollo. However, I have NEVER experienced such a strong sense of camaraderie and sense of purpose to simply have fun and support the band! For the next 3 hours and 20 minutes T5 was a full-blown rowdy, singing, dancing cacophony of noise and celebration for the finest band of the last 10 years. Playing many songs that hadn’t been heard live before or at least for a very long time and aided by additional singers and a very tasty brass section, the sound was fantastic and joyous. Comprising of two sets with a very brief break between them, the night flew by and soon it was the final farewell.

Dance Yrself Clean
Drunk Girls
I Can Change
Time To Get Away
Get Innocuous!
Daft Punk Is Playing At My House
Too Much Love
All My Friends

Someone Great
Losing My Edge
Home

All I Want
Jump Into the Fire  (Harry Nilsson cover)
New York, I Love You But You’re Bringing Me Down

It’s difficult to pick out any one highlight, but the rendition of the full version of 45.33 was truly epic and so wonderful I can barely communicate how fabulous it was.

Now that the dust has settled and a few weeks have past I can reflect back on what was truly one of the top 5 gigs of the whole of my life and that’s really saying something!

So thanks for the memories James & Co and enjoy whatever you do next!

To quote from Losing my Edge ‘I was there!’