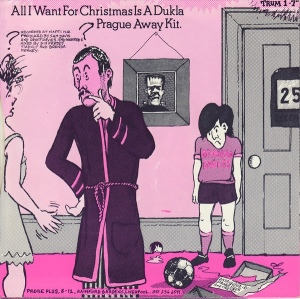 I shouldn’t…..but I get quite annoyed whenever I see Half Man Half Biscuit lumped in with the C86 movement.  Yes, their initial recordings were marked by a cheapness and low-fi quality that became the mark of the C86 bands but given that the utterly brilliant Back In The D.H.S.S was released in 1985   – and by utterly brilliant I mean not only was it great entertainment but it I had never heard anything quite like it before – it seems unfair that a band as distinctive and ground-breaking as HMHB were put into a genre where a lot of bands sounded and indeed looked alike.

One of the reasons I fell for the band was their willingness to bring football into their lyrics.  It is hard to imagine nowadays when the sport is seemingly omnipresent within British society with every up and coming musician, male and female alike, keen to pass on details of their allegiances but back in the mid 80s football was a real no-go area for anyone involved in the creative industries.  It was a sport to which mindless violence was all too easily attached and seemed in terminal decline, certainly in terms of spectator numbers while the four channels of telly were falling in love with cosy ‘new’ sports like snooker, whose audience figures dwarfed those of football – indeed there was time in the 80s when disputes over broadcasting rights led to absolutely no coverage at all on our screens for months on end.

HMHB came along as a total fresh breath of air.  Their lyrics dripped with humour, sarcasm and were jammed with referenced points that were easily understood and appreciated by the country’s youth.  Not only did they write positively about football but in The Len Ganley Stance they even had a pop at snooker!!

I’m intending to feature HMHB in the imaginary LP series in the future and I’ll return to them in more detail at that time.  In fact I’m doing it tomorrow.

For now, here’s their track that appears on CD86:-

mp3 : Half Man Half Biscuit – All I Want For Christmas Is A Dukla Prague Away Kit