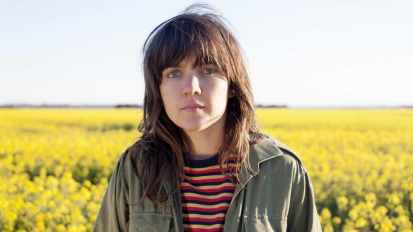 The second day of some old postings written by Tim Badger. This one was part of a double-header, part one of which had been written by SWC and which appeared on 17 December 2015. It was all to do with the two of the them ending up in the pub after the office Christmas lunch/party during which they try to agree on the best 20 albums of the year. It is probably best to use the final para of SWC’s piece to set the scene:-

“The taxi dropped Badger off at home around 11pm – it was not even a late night. I look behind me as the taxi drives away to see Badger fall into a hedge. I smile, it’s been the best Christmas party for a while. Even if I appear to have inherited a horse shaped balloon (no idea at all where that came from).

I phone Badger – his wife answers, he’s not up yet, she says.

My wife has been doing wonderfully well since her accident she is recovering brilliantly and is now able to hop around the house on crutches with the dexterity of a gazelle on amphetamines. It is I think slightly embarrassing that here I am on the afternoon after the afternoon before at 4.10pm just about to get out of bed because I have had a ‘slight headache’.

She has won an award, the clever thing. It is some women in business thing, and as I slowly drag myself down the stairs, clutching onto the bannister for near life, like a newly walking child, she is sitting in the study (I say study, I mean small tiny spare box room), typing her speech up. She has been reading a book by a chap called Max Atkinson, who writes about the use of three-part lists in speeches. Why am I telling you this, well all will be revealed.

The night before ended with S-WC and I listing our Top 15 albums, the last 40 minutes or so of this were a ferocious argument about whether or not we were going to allow EP’s into the list. In the end I relented, we had yet to reach a decision on the Top 5 – I mean we know what they are – but not in what order. Side One of this compilation will be the tracks from 10 to 6 and where I can remember I’ll add what parts of the conversation that decided that. obviously I’ll embellish it make me sound cool and to make S-WC sound like Brian Blessed on Botox – which by the way is exactly what he looks like.

I head into the study I intend to give my wife a kiss and tell her that I am sorry for being such a lightweight. I am 48 years of age and I really should know by now that drinking the best part of a bottle of rum, six pints and three glasses of wine (I think) is not the greatest idea in the world. I remember telling my taxi driver telling me that “I was absolutely fucking shedded’ I have never used the word ‘shedded’ in my life before. I hang my head with shame.

My wife is typing away, she has her back to me, suddenly she stops and holds up one hand. Then she starts speaking “Before you step one foot inside this room, darling, you must a) Shave, b) Shower and c) Clean your teeth. Not necessarily in that order”. This reader is the three-part list I referred to above. Delivered with style and authority, the word ‘darling’ has never been said with such menacing threat. I turn around and creep back along the corridor to the bathroom.

Half an hour later I am sitting on the couch in the study cradling a cup of tea like it was my last possession. At least I am washed, shaved and my mouth no longer feels like it has a couple of angry wasps having post break up sex in it. Actually you remember that bit from Itchy and Scratchy (the cartoon within a cartoon on the Simpsons) where Scratchy (he is the cat, right?) gets his tongue pulled out by Itchy so it goes right to floor and the some dynamite gets put in it and then lit – rolled back up and his head explodes, that’s how I felt earlier on.

My phone rings it is S-WC, of course it is, he chuckles down the phone at me as I groan about my head and the last hours events. At least it sounds like his hangover was just as bad as mine. I end up inviting him round for lunch tomorrow so we can finish off the list.

It is tomorrow and S-WC are I are laughing about the Christmas Do, neither of us have been into work since then – both having sensibly taken the rest of the week off, but we understand that there is some scandal involving at least one high-ranking manager, a park bench and a ‘lady of the night’. This cheers us massively.

which they introduced with the following words:-

The most lovely song on this album (Sometimes I Sit and Think and Sometimes I just Sit) is one about house hunting. “Depreston”, it’s called—a quiet little ballad that just kind of submits itself to the noise around it. It’s the details that make this album so compelling, even down to the safety rail in the shower. Then she tells us how much it would cost to rip the whole house down again and again.