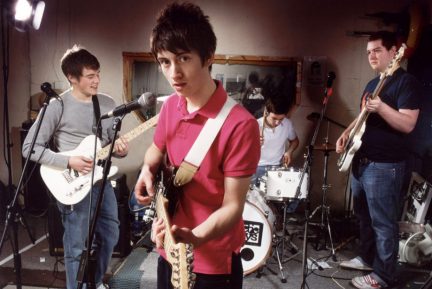 Tim Badger came up with an Arctic Monkeys ICA on 18 October 2018. His words about two of their earliest songs really hit the nail on the head:-

When the Sun Goes Down (From Whatever People Say I Am…)

These two tracks sum up everything about the band when they first burst onto the scene. They are both essential listening and frankly without them this ICA would be useless. I’ve written about the first song before in some depth but I don’t think I have ever waxed lyrical about ‘When the Sun Goes Down’.

It is quite astonishing, both lyrically and musically. A bleak ode to prostitutes in Turner’s native Sheffield and their scummy pimps or customers. It’s astonishing in a number of ways – firstly the way that the tone changes after the line “He’s a scumbag don’t you know’ is breathtakingly mature for a band who are releasing just their second single. Then we are astonished again near the end when the scummy man arrives the prostitute becomes happy because as Turner tells us, sagely, “she must be fucking freezing, scantily clad beneath the clear night sky”. I mean that is some tragically beautiful poetry there.