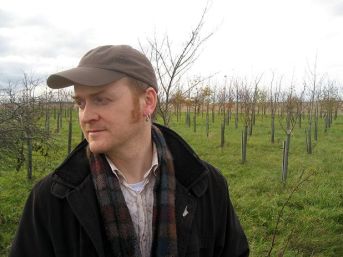 James Yorkston is a Scottish folk musician, singer-songwriter and author. A native of Fife, he was an integral early member of the Fence Collective, an independent record label based in Anstruther and Cellardyke in, Fife founded by musician King Creosote and run by The Pictish Trail until 2013.

Yorkston started out as bassist for punk band Miraclehead, which morphed into the band Huckleberry, who recorded a number of independently released records. Yorkston’s solo career began when John Peel played a demo of his “Moving Up Country, Roaring the Gospel”, in 2001 proclaiming it had the “song title of the year, no doubt”. This led to Bad Jazz Records scrambling for Yorkston’s details and releasing that track as Yorkston’s debut 7″ under the name “J. Wright Presents”.

By this time Yorkston had started to play solo gigs in Edinburgh, his debut supporting Bert Jansch in the Café Royal. Seeking more shows, Yorkston sent a copy of the single to John Martyn, asking him for a support slot on his forthcoming Edinburgh date, and Martyn responded by offering Yorkston all 27 dates on his UK and Ireland tour. While on this tour, Yorkston was seen by Laurence Bell of Domino Records, who was so impressed he had a recording contract sent to Yorkston’s lawyer the following week. Subsequently he signed to Domino Records, recording music with a number of friends and associates credited as The Athletes on his records. His debut album Moving Up Country, co-produced by Simon Raymonde of the Cocteau Twins, became Rough Trade Record Shops Album of the Year for 2002.

For Yorkston’s second album, he asked Kieran Hebden of Four Tet on board as producer, and they made Just Beyond the River. Yorkton’s fan base continued to grow and he was offered tours with Beth Orton, David Gray, Tindersticks, Turin Brakes, Lambchop and Kathryn Williams.

The follow-up, The Year of the Leopard, was produced by Rustin Man, who had recently worked with Beth Gibbons (lead singer with the band Portishead) on their Out of Season record. In 2007, Domino Records released Roaring the Gospel, a collection of unreleased songs, which led NME to say “Yorkston has talent as deep as a mine shaft”.

His fifth album, When the Haar Rolls In, was released through Domino Records on 1 September 2008. Guests included Nancy Elizabeth Cunliffe, Norma Waterson and Mike Waterson. A special edition was released featuring an album of remixes and an album of James Yorkston covers by artists such as King Creosote, U.N.P.O.C. and Cathal Coughlan.

In August 2009, Domino Records released Folk Songs, an album of traditional songs, arranged and performed by James Yorkston and The Big Eyes Family Players. In March 2011 Yorkston’s debut book, It’s Lovely to be Here: The Touring Diaries of a Scottish Gent came out, via the Domino Press. That year he collaborated with The Fruit Tree Foundation, appearing on its debut album, First Edition.

In August 2012, Domino Records release Yorkston’s seventh album, I Was a Cat from a Book which had very favourable reviews and debuted on the Official Record Store Chart at number 6.

Domino Records’ eighth album with Yorkston, The Cellardyke Recording and Wassailing Society, produced by Alexis Taylor of synth-pop band Hot Chip, was released in August 2014. It featured special guests KT Tunstall and The Pictish Trail amongst others.

In 2015 Domino Records released ‘The Demonstrations of the Craws’, a vinyl only release, featuring a compilation of demos from The Cellardyke Recording and Wassailing Society and I was a Cat from a Book. Yorkston also began running his folk club Tae Sup wi’ a Fifer, in Kirkcaldy, Fife, which has thus far had such diverse guests as Martin Carthy, Alexis Taylor, Dick Gaughan, Richard Dawson, Bill Wells & Aidan Moffat, Karine Polwart, Lisa O’Neill, Steve Mason, Linton Kwesi Johnson and Malcolm Middleton.

His ninth album, Route to the Harmonium, recorded in the small Scottish fishing village of Cellardyke and co-produced by David Wrench, was released on 22 February 2019, via Domino.

An incredibly busy and versaile man, I’ve long admired him, never failing to be entertained on the five or six times I’ve seen him live. Who’s have thought I’d ever fall for a folkie?

This is the updated version of the song that got John Peel all giddy, as re-recorded for his debut Domino album in 2002:-