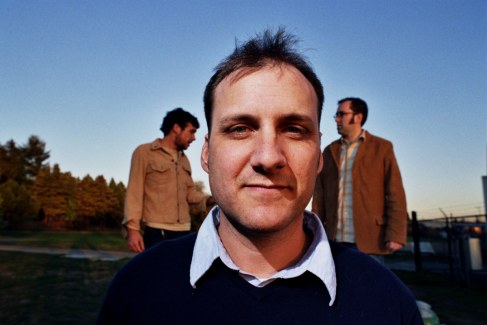 Preston School Of Industry was the band formed by Spiral Stairs (aka Scott Kannberg) after the messy end of Pavement in 1999.

I was always bemused as to why he chose to name his new act after what I assumed was a place of learning in a town in the north-west of England, but that’s only because I had no idea it was actually all to do with a correctional facility in California, originally opened in 1894 as a reform school.

He recruited Jon Erickson on bass and Andrew Bodger on drums.  A five-track EP, Goodbye To The Edge City, was independently released in early 2001, after which the trio signed to Domino Records.  The album All This Sounds Gas hit the shops in August 2001, bookended by two singles – Whale Bones and Falling Away.

My own preferences for Pavement had largely been the tracks on which Stephen Malkmus had been at the forefront, and so I wasn’t all that fussed or inclined to go seek the PSOI material out. What I do have are the two singles mentioned above, one courtesy of it being included on a Domino Records compilation, while the other came from a one-track promo CD, which was later sold on by a record/CD shop for the grand cost of 50p.

They are quite different in mood and tempo. Whale Bones, which I recently discovered was written with the intention of being included on the final Pavement album, Terror Twilight, does have the feel of what could have been a single by the his old band, and it would have been interesting to hear Malkmus’ contribution to any backing vocals. Falling Away is much more upbeat and quirky in nature, one which occasionally threatens to take off and go somewhere special without, it seems, ever really doing so.

Wiki provides the info that PSOI released a second album, Monsoon, in 2004, after which Stairs next burst of activity came in 2009 when he released the album The Real Feel under his own name.

One thought on “THESE ARE ALL I HAVE….”