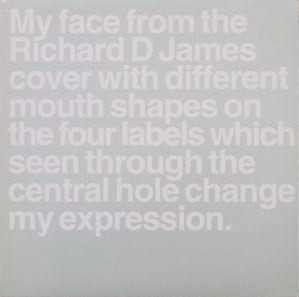 After JC revealed that the Spectrum album was worth somewhere near £200, I decided it was time to tell you about the ‘Come to Daddy’ Record in the box. There is a backstory, inevitably.

Badger and I are in a team building day and the hired person has just asked us to write down five people, living or dead that we want to invite to a dinner party. He gives us five minutes to think about it. Five minutes. This is a topic that Badger and I talk about literally every day, we need like twenty seconds.

I know what Badger will write before he has even written it, and likewise he can do mine.

The five minutes is up and slowly the hired suit works his way around the room and gives us five more minutes to explain why. Badger stands up and reads his out.

“First up Thomas Hardy. Because when we’d finished the roast beef he could read ‘The Convergence Of The Twain’ to us all whilst we puffed away on Cuban cigars illegally smuggled into country inside Hardy’s obligatory Top Hat“ and with that he starts quoting…

“In a solitude of the sea, Deep from human vanity And the Pride of Life that planned her, stilly couches she…”. He pauses.

“Next up, L.S Lowry, and I’d ask him to draw a picture of us all after the meal whilst Hardy orates. After Hardy has finished we will retire to the garden, where firstly David Gower will replay his innings against India at Headingley in 1985, with me playing the part of the Indian bowler, but knowing Gower I will probably bowl him out after four balls for a duck.

After Gower, Ossie and I would recreate Carlos Rey’s goal from Escape to Victory, whilst Lowry and co shout “Stay on your feet Ossie!” as loud as they can. And then, only then, Richard D James would DJ until the early hours spinning tracks from his albums ’Drukqs’ and ‘Selected Ambient Works Vol 1 and 2’ from a hastily arranged DJ booth in a tree…oh, and I don’t care if you don’t know who Richard D James is. You should. That is all”. He sits down.

There is applause. Obviously.

I sigh I have to follow that with a reason for why I want Helen Baxendale at my dinner table, other than the fact that she is fit.

I’ll add some context as to why Badger chose these five people, Badger read out the ‘Convergence of the Twain’ at his dad’s funeral in 2013. It was his dad’s favourite piece of writing. He would have wanted his dad at the Dinner Party but modesty probably prevented him for saying that because at the time of this event his dad was really ill.

In 2007 he bought his wife a beautiful framed copy of an LS Lowry picture (Lowry is her favourite artist) for their 10th wedding anniversary.

Badger told me that he once asked David Gower to be his best man at his wedding, after meeting him by accident outside Stevenage Railway Station (Gower refused, the dolt). Gower did sign a copy of ‘Black and Blue’ by Ian Rankin for him though (“It was all I had that was made out of paper”). On the wall in the spare bedroom of Badger Towers is a framed No. 7 Spurs Shirt, signed by one Osvaldo Ardilles. It’s still muddy.

When I found out how rare this was and how much it was changing hands for, I phoned Lorna and told her and this is what she said:-

I asked if she wanted it back, its valuable I tell her.

“No” she said, with a sigh. “I bought that for Tim, he saw a copy online and mentioned it to me and laughed about how expensive it was, he couldn’t believe it. It cost me £200 from a dealer in London, it’s never been played”.

“I wasn’t going to tell you that. I bought it for him a week before I had my car crash and it was a present because he was going to be a daddy and after the crash, well that didn’t happen”.

Shit. This conversation isn’t going quite to plan. I feel like an arse. (about five years ago The Badgers were expecting their first child, but tragically after a car crash, Lorna lost the baby).

There is silence. I don’t know what to say. I stumble around the subject, I mean I had no idea about the significance of the record.

“It’s fine, sweetie” she tells me. “Honestly, I thought he’d got rid of it, I really wouldn’t have minded it he did. If it makes you happy, sell it and donate the proceeds to charity, most of those records held good memories for Tim, but that one probably wouldn’t have, much as he loved Aphex Twin. It shouldn’t have been in that box though, perhaps I should have checked before.”

Oh god, no; absolutely this is not your fault I tell her. It’s OK. Please forget I mentioned it. We sigh, and I change the subject to something else. I think I mentioned the new road into Newton Abbot.

And with that we say goodbye. I feel miserable for the rest of the day.

I haven’t sold the record, but seriously if any of you readers want to make me a sensible offer (for charity) then I will listen. The music won’t be to everyone’s taste, but it is a seriously rare piece.

The double twelve-inch promo of ‘Come to Daddy’ is one of the rarest records that I have ever owned. The second Twelve Inch (sides C and D) contained four tracks that were never released anywhere as far as I know.

Here they are just for you.

I know that there’s a few Aphex Twin fans out there among the regulars who will be aware of the rare nature of these particular pieces of vinyl.  I’ve looked it up on Discogs and there’s not a copy for sale just now.  Two separate copies went for more than £200 in February 2021, so that’s probably what would be a decent bid if anyone wants to make an offer.

I’ll take any bids from anyone who is interested.

Please submit them to the usual address – thevinylvillain@hotmail.co.uk – and I’ll send you back an acknowledgment at the earliest opportunity.  Come the end of April 2021, I’ll chat to SWC, and he’ll then decide if a suitable offer has been put on the table and take things from there.