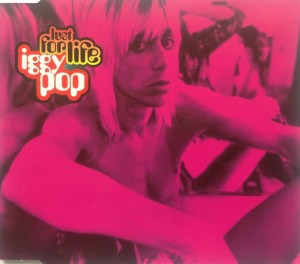 The the film Trainspotting back in 1996 brought Iggy Pop to a whole new audience. In what is one of the most memorable opening sequences ever committed to celluloid, two of the main characters run as if their lives depend on escaping their pursuers (it would transpire they were running to evade capture after a shoplifting expedition to feed their drug habit), to the accompaniment of Lust for Life.

It led to Virgin Records, for whom Iggy had been recording since the early 90s, to re-release the single complete with video in which Iggy did his topless Iggy-dance interspersed with clips from the movie. The re-release got to #26 in the charts. I found a copy of the single in a charity shop years later for 20p…an absolute bargain given it had two live tracks and an admittedly appalling cover version making up the b-sides:-

Lust for Life was recorded at an outdoor festival gig in Ireland in the summer of 1993 while I Wanna Be Your Dog was from the Rock For Choice event at the Hollywood Palladium in 1995.