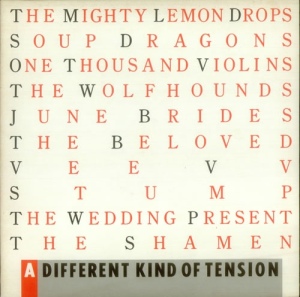 There’s a cracking 10-track compilation LP sitting in the cupboard;  actually there’s a few but for today there’s just the one under the microscope.

It’s called A Different Kind of Tension – and it’s not to be confused with the LP of the same name  by Buzzcocks – that was released in 1986 on the Pressure Of The Real World label. It has the prefix PRLP1. I have no idea at all whether there was ever a PRLP2 or any other release at all on the label. Google search came up with nowt.

It was an album I picked up back in 2008 while temporarily living in Toronto and it cost me the equivalent of £3.  As it turns out, two of the tracks on the album were also included on the CD86 compilation and were part of that recent 48-part series.  The idea of today and next Sunday is to offer up the other eight songs as a postscript or perhaps more appropriately, an encore to the series.

Here’s side A of the album:-

Songs 1 and 2 were on CD 86 as too were different songs by the bands performing songs 4 and 5.

Here’s some relevant info on the three ‘new’ songs:-

One Thousand Violins formed in Sheffield, and the featured track is a b-side from their debut single Halcyon Days on Dreamworld Records which was released in 1985. However, it proved more popular and so enduring that it ended up gathering enough votes to make John Peel’s Festive 50 the same year. Further singles and an album soon followed, but before long musical and artistic differences led to them breaking up.

The Wolfhounds rather splendid ditty Anti-Midas Touch was on CD86.  This however, is their 1986 debut single on Pink Records.

mp3 : The Wolfhounds – Cut The Cake

I’ve already said everything before about The June Brides and have recommended that you pick up this compilation album. Their debut single was on CD 86. This was the wonderful follow-up:-

mp3 : The June Brides – Every Conversation

Quick reminder that I’m looking for readers to e-mail me lists of their Top 10 LPs for 2015 so that I can submit a collective entry for the BAMS 2015.  Click on this post for more background.

One thought on “NEXT YEAR’S NOSTALGIA FEST (Postscript 1)”