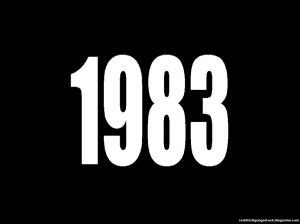 I’m returning to Germany again for today’s Friend Electric who is Walter:-

“I’m a mid-age man, spending a lot of my time listening to music, watching soccer, reading books and other stuff” (i.e he sounds just like the bloke who writes TVV!!!!!!)

And he also posts very regularly on A Few Good Times In My Life.

This is another great blog in which the author writes in a language other than his native tongue and again it puts those of use who can speak just one language to shame. Some of the posts on this blog are quite short – for instance Walter might just say that he is sharing a particular song because it popped into his head and reminded him of how great it was.

But more often or not, the post will be in-depth and in one particular series, 40 Records in 40 Years, in which Walter is telling the story of his life, you will find yourself reading things and having your memory jogged in ways that go way beyond music. I’ve posted below his entry in respect of 1983.

When I think back what happened in this year of my life that it was stamped by two influences: First is the wakeup of my political thinking and second was that I started playing football again.

Compared to now the twenty something was more interested in politics and tried to show their point in mostly peaceful ways. I still remember what we discussed these times. There was the NATO Double-track decision that offered the Warsaw pact the deployment of the mobile American middle-range missiles (Pershing II) to rebuilt the state of Mutual Assured Destruction. NATO offered immeditate negotiations with the goal to ban nuclear armed middle-range missiles from Europe completely, with the provision that the sam missliles could be installed four years later should the negotiations fall. Knowing that the Americans deposited a lot of nuclear warheads in southern Germany and not far away from our place we were afraid of the so called ‘war by mistake’ and a nuclear Holocaust in Europe.

This was the birth of the peace movement in Germany. We demonstrated against the NATO double-track decision on some marches through the cities and finally in October with the largest human chain. More than 300.000 people stood between Stuttgart and Neu-Ulm (more than 100 km) hand in hand to say no to this decision. How proud we were to be members of this.and I still remember that slogan ‘Petting instead of Pershing’. It was also the time when our new government by Mr. Kohl turned into another politic of nuclear energy forcing the building of new atomic reactors. Reminding the accident on Three-Mile-Island we had fears about what could happen when we lose control over the systems. We supported the Green Alternative so that they were elected in the autumn to the German Bundestag. In this connection I have to remember the leading person of this party Petra Kelly and her partner the former general Gert Bastian – that they died a few years later at suicide is another story to be told.

The third thing I remember was the census that should be done in this year. A lot of questions to be answered in interviews partly very private. The easiest way to say to the census was not opening the door to the interviewer. And after some judical judgements the government denied the census.

This was the background we discussed at long evenings in our local pub. A lot of them lads I did know for years – others were totally new to me. One day the owner of the pub wrote with chalk on the board: ‘Is anyone interested to play football in the name of the pub?’ We sat there watching him writing and said spontaneous ‘Try us!’ And that was the birth of a hobby team that lasted for nearly 20 years. We all knew that we could be successful because we all played football in different clubs. But our first tournament was a totally disaster because we thought we were unbeatable and play with several beers in our head. But more of this later.

(JC adds – at this point in the piece, Walter puts up some videos – which given it was 1983 and the height of MTV-mania seems very apt – before returning back to words)

My first thought was that this year were not released as many remarkable and leading records compared to the last year. Maybe a little break for the things will come. Anyway – by adding them up I have to say that I was wrong. Here some records that I remember well:

David Bowie – Let’s Dance: Sound of the summer that fit to a lot of people

New Order – Power, Corruption and Lies: Elementary for what will be called dancefloor later

Talking Heads – Speaking In Tongues: Excellent record after a couple of years

Big Country – The Crossing: Love to hear some good guitars again that sounded like bagpipes

Rufus – Stomping At The Savoy: Together with Chaka Khan a furious live recording

Marc And The Mambas – Torment and Toreros: Following project from Marc Almond together with Matt Johnson. A crude mixture of French chansons, freaky guitars, string arrangements, dance tracks and a little bit of dark wave.

The The – Soul Mining: Matt Johnson gave us a combination of wave, dark and dance

Michael Franks – Passion Fruit: I always loved his voice, and now he released a little masterpiece of funk and fusion

I didn’t went often into the cinema this year but there are still some movies I can remember::

Trading Places: Dan Aykroyd an upper class broker and Eddie Murphy a homeless street hassler changing their lifes because of an immoral bet.

The Big Chill: Lawrence Kasdan shows us what could happen when you meet your former class mates after 15 year according to a funeral of your friend

Silkwood: My first time I recognized Meryl Streep as an actor when she stood up against the atomic industry

Cujo: Another horror thriller based on a novel by Stephen King – beware of the dog

Not only the protest against the decisions of our government ruled the world – there was something else:

The mighty Björn Borg retired from Tennis; 25 members of the brigada rossi were imprisoned for life after for murder of Aldo Moro; Klaus Barbie is officially charged with prison for war crimes; over 2000 people, most of them Bangladeshi Muslims, were massacred in Assam, India; Strategic Defense Initiative by Ronald Reagan – became well know as ‘Star Wars’; Motown celebrates 25th anniversary and Michael Jackson creates the moonwalk; Sterm magazine releases the Hitler diaries which are later found to be forgeries; Aberdeen FC wins the European Cup Winner’s Cup by beating Real Madrid 2:1 after extra time; the Tories are re-elected by a landslide majority; Anti-Tamil riots begin and nearly 3000 where killed – start of the Sri Lanka civil war; Korean Air Lines Flight 007 is shot down by interceptor when the civil aircraft entered Soviet airspace; Maze prison escape.

The second official record from Fun Boy Three is on of the most perfect records ever that combined political and social commentary with fantastic harmonies and melodic twists. The whole record has a full touch of sadness and hopelessness all over. Often combined with the last hope: love.

It was produced by Talking Heads member David Byrne who also played guitar on  it. I can’t remember when I heard three voices (Terry Hall, Neville Staple and Lynval Golding) in that harmony before and after. Their single ‘Our lips are sealed’ reached the top 30 in Britain these year. Less people will remember that this song (co-written by Terry Hall) was recorded by the Go-Go’s a few years ago (also a band I remember very well sometimes). It is pure pop but effective arrangements feature trombone, cello and other orchestral instruments make this record a milestone in British music.