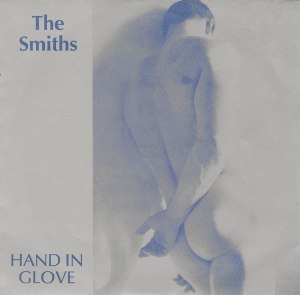 The position of this song in the chart down at #7 will come as a shock to many regular readers and to those who have known me for many years. There’s at least one mate who tipped it to be #1….

I was fortunate enough to be around when The Smiths first came to prominence. They remain my all-time favourite band, and I don’t think they will ever lose that particular mantle however long I manage to live.

I was present at their first ever gig in Scotland – at the Queen Margaret Union in Glasgow on Saturday 2nd March 1984. This was a truly astonishing night in a small student-venue that was packed to the rafters. It was very hot, sweaty and tightly-packed and it is probably the nearest I’ve ever came to passing-out at a concert.

The Smiths had not long cracked the Top 20 with their third single What Difference Does It Make?, while their recently-released debut LP had gone Top 10. So they were hardly a secret.

The venue was woefully inadequate for the demand for tickets, and there were dozens of folk outside pleading for the lucky few to sell for way over the cost (which I can’t recall, but was no more than £4 or £5). The level of expectancy was enormous, and the build-up to the band taking the stage bordered on insane hysteria. I’d never experienced anything like it beforehand, and never again since (although the first five minutes down the front of the Morrissey ‘comeback gig’ at the MEN Arena in 2003 came awfully close).

Steven, Johnny, Mike and Andy took to the stage to a crescendo of noise – I was worried that the crowd was so loud that we wouldn’t hear anything above it. The opening notes of Hand In Glove were struck – if anything this only cranked up the atmosphere. The one song that those of us who had been in from the start adored above all else – the song that had been the flop single with the controversial nude male on the sleeve – and the song that seemed more than anything to sum-up what was a truly unique relationship between the band and its fans.

And because it is my favourite, I was prepared to pay a fair amount of money to pick up a mint copy of the single on e-bay as a replacement for the one lost all those years ago in Edinburgh. Let’s face it, the b-side, which to my knowledge has never appeared on any subsequent compilation, is every bit as amazing:-

As with The Wedding Present, there would have been multiple entries for The Smiths in this chart were it not for the one single per artist rule that I set. In fact as much as one-quarter of the chart could have been a Morrissey/Marr compilation.

I surprised myself when I identified six other 45s that were even more of a favourite than this.

You’ll soon learn what they are over the coming days, but I suspect that many of you will be beginning to narrow it down pretty accurately.

One thought on “MY ALL TIME TOP 10 SINGLES : HAND IN GLOVE by THE SMITHS”