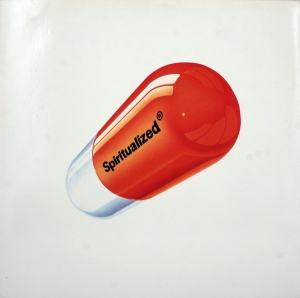 Santa, via Jacques the Kipper, brings me a copy of Ladies and Gentlemen We Are Floating In Space, the hugely acclaimed LP released a few months earlier by Spiritualized.

Sadly, it’s an LP I can’t quite take to albeit there were a couple of songs I thought were more than half-decent….but despite maybe a dozen or so efforts, I still didn’t get what all the fuss was about.

Fast forward fifteen or so years. Decide to give it another go.  This time I do get it.  I can’t put my finger on other than acknolwedging that, even as I hit my 40s, my musical horizons continued to expand.  Let’s just say, it was like discovering a lost masterpiece in the attic.

It’s an LP in which just about every musical instrument and every musical genre seems to have been thrown into the mix. Much of the material is about a painful and messy end to a relationship, with the basis being the real-life events that surrounded the band’s frontman Jason Pierce and the band’ keyboard player Kate Radley.

My favourite song on the album is Broken Heart which must be one of the the most gut-wrenching, emotionally-draining but defying songs ever written and recorded.  The fact the person who the song was written about contributes so much to its haunting sound just seems incredible.

I hadn’t realised until very recently that this was one of two songs later re-recorded and put out as EP in August 1998.  I was delighted therefore to come across a second-hand copy of the 12″ of Abbey Road EP and rushed home to play this version of Broken Heart.

And to my astonishment and delight I discovered that it’s even better than the LP version with the addition of what sounds like a full-blown orchestra and gospel choir to the mix.

The leads track on the EP was this:-

One of the most accessible tracks on the album but it couldn’t get any airplay thanks to the regular use of the word fuck/fucked/fucker.  It therefore made sense to all and sundry to have a fresh stab at it, but the use of mess/messed to replace the swear words, to my ears, diminish it somewhat.

The EP was completed by something which wouldn’t have been out of place as the credits roll on a movie where the very final scene has left the entire audience in a state of shock and tears:-

The Abbey Road EP didn’t sell all that well, only reaching #39 in the singles chart.  But then again, none of the singles from Ladies and Gentlemen…. went Top 20.