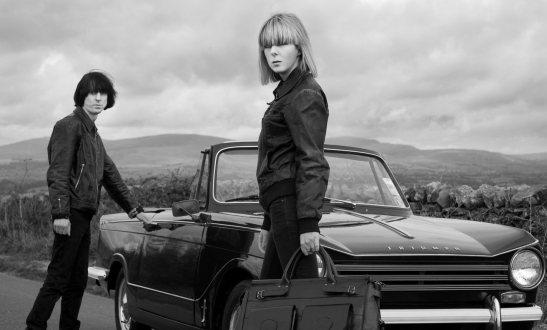 I’ve lifted the following from the bio page on the official website:-

“The Lovely Eggs are an underground punk rock duo from northern England.

They have a fierce punk rock ethos that music should have no rules.

For Holly and David being in a band is a way of life. True to this, they live the way they play. Fiercely, constantly in search of the good times.

With observational and often surreal lyrics about life The Lovely Eggs have a powerful stripped down sound: one vintage guitar amp, one Big Muff distortion pedal, a guitar and a drum kit.

With releases in the UK, Europe, USA and Japan, The Lovely Eggs have played hundreds of gigs around the UK, USA and Europe supporting the likes of Half Japanese, Shonen Knife, The Slits, Young Marble Giants, The Television Personalities and Art Brut as well as a two month tour of America and a string of dates at SXSW in Austin, Texas.

Holly (guitar/vocs) and David (drums/vocs) have also worked with comedian Graham Fellows (aka John Shuttleworth) as well as Jad Fair from the seminal Texas band Half Japanese. Their songs appear in Canadian film Molly Maxwell and have been sampled by Zane Lowe for Scroobius Pip. The pair also feature on a Radio 4 Richard Brautigan documentary, presented and in discussion with Jarvis Cocker contemplating the influence of the American surreal author on their music.

They have produced four albums.

The first ‘If You Were Fruit’ (Cherryade Records, 2009) ranked in the top 40 records of the year by Artrocker Magazine and was nominated for XFM’s ‘Debut Album of the Year’.

The second ‘Cob Dominos’(Cherryade Records, 2011) has gained widespread critical acclaim, with ‘Don’t Look At Me (I Don’t Like It)’ (featuring a video with guest appearance from John Shuttleworth) fast becoming an internet hit.

Their third album ‘Wildlife’ (Egg Records, 2012) featured the Gruff Rhys-produced single Allergies, originally released on 7″ on the Too Pure Singles Club label. The track (which sold out before release day) won the BBC 6 Music Rebel Playlist – with 82% of the public vote, was declared winner on Steve Lamacq’s 6 Music Round Table and was Artrocker’s single of the month. The song featured a death-shaped psychedelic spectacular promo vid featuring a special guest appearance from Gruff Rhys.

With a 4 Star review in Record Collector, ‘Wildlife’ also contains the singles ‘Food’ which was remixed by Cornershop’s Tjinder Singh for release on his Singhles Club Label as well as ‘I Just Want Someone to Fall in Love With’. Both songs received much support from BBC 6 Music.

The Lovely Eggs have become well-known for their live performances and have played everywhere from Amsterdam squats and Los Angeles scrap yards to steam trains in Ripley and charity shops in Leeds.

In April 2013, the pair had a baby but true to their ‘no rules’ philosophy they bundled their newest member in the van and took him on tour with them, racing round the UK with family and friends like a tripped out version of On The Buses with two fingers up to conventional family life firmly out of the window.

2015 saw The Lovely Eggs return with their fourth self-produced and self-recorded album ‘This is Our Nowhere’: a title which sums up their celebration and love of a scene which doesn’t exist in the eyes of the manufactured mainstream. Ironically the record received 8/10 in the NME.

Lead single ‘Magic Onion’ (made in collaboration with artist and video director Casey Raymond and released as a limited edition 7″ on the Cardiff-based D.I.Y. Flower of Phong label) was accompanied by a handmade book of psychedelic/nightmarish proportions and included a B side version of the song with Sweet Baboo, who joined them in an acoustic and decidedly pickled duet. The single gained much support from BBC 6 Music and a sell out tour of the UK followed.

The second single to be released from  the album ‘Goofin’ Around in Lancashire’ was released in November 2016 on ltd edition 7″ “fried egg” vinyl. With an accompanying video by Casey Raymond, again it sold out immediately and gained much support from BBC 6 Music, with 6 Music’s Marc Riley declaring it one of his top tracks of 2015. To promote the release, the Eggs embarked on another tour of the UK, with many sold out dates and in 2015 alone were invited to perform two live sessions for Marc Riley’s BBC 6 Music show.

And my good friend Aldo is a big fan of theirs.  Understandably so when you listen to these:-

Indie-pop with more than a hint of cheek and fun.  No wonder they’ve had so many influential people say good things about them.