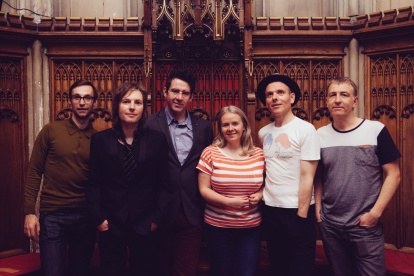 I’ve spent the last three Sundays bemoaning the horrendous drop in quality of the Belle and Sebastian singles/EPs in comparison to what they were producing back when they first appeared on the scene.  Parts 11-13 of this series took in the singles from The Life Pursuit, the LP released in 2006.  Part 14 is going to attempt to wrap up the past decade.

The reason for this is primarily that while singles have been released (as such), they’ve mostly been digital downloads and the idea behind this series was as much to draw attention to b-sides as anything else.

The tour to promote The Life Pursuit was an exhausting one. The first show of the year was in Glasgow on 15 January.  The last was in September in Dublin after almost 90 gigs across the globe, taking in Europe, USA, Australia and Japan, including all sorts of appearances at many of the summer festivals.  It would be four years before the band resurfaced, with the release, in September 2010, of the LP Belle and Sebastian Write About Love, again on Rough Trade. (although in the intervening period, a very welcome release in the shape of  The BBC Sessions, a compilation of unreleased recordings recorded between 1996 and 2001, kept fans happy).

The new album wasn’t preceded by any single. In the end, three tracks could be found outwith the album with Write About Love and I Want The World To Stop issued as digital downloads in October 2010 and February 2011. Then in July 2011, a very low-key and nowadays difficult to find EP was issued on 12″ vinyl by Rough Trade with these four tracks:-

The last of these was the only new track (although it had been available as a bonus track for those who had bought the download of the album):-

mp3 : Belle and Sebastian – Blue Eyes Of A Millionaire

It’s a rather lovely little number and a real step up on the b-sides of the modern era.

The next few years were dominated by Stuart Murdoch dedicating himself to God Help The Girl and it wasn’t till January 2015 that new Belle and Sebastian material emerged. By this time, one of the key members, Mick Cooke, whose trumpet playing on the records and in the live setting really helped make things special, had departed the band to spend more time with his young family and do some film composing.

The new material was another LP, Girls In Peacetime Want To Dance, which was released on Matador Records. No singles were officially lifted from it although three tracks – The Party Line, Nobody’s Empire and Allie – had digital/promo releases. All of the available songs were made commercially available to fans, although you had to shell out for a limited edition, quadruple LP to get some otherwise unavailable extended mixes and these bonus tracks:-

These would have made a marvellously diverse and entertaining 4-track EP almost up there with some of the really early material, albeit the songs demonstrate just how much Belle and Sebastian have evolved over the best part of 20 years.

And that seems a good way to draw this particular mini-series to an end.  Hope it’s been enjoyable for everyone somewhere along the line.