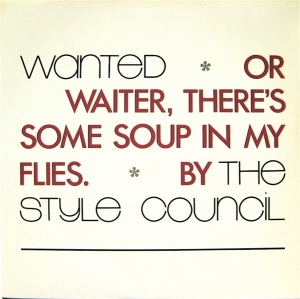 So we come to the first single that I made no effort to buy at the time of its release in November 1987.

To be fair, this was a period in my life when I wasn’t listening to much music at all. I was going through a bit of an upheaval trying to sort myself out in some ways that involved a bit of a change in lifestyle including looking to get married and settle down. The Style Council didn’t seem important anymore. And judging from what I was able to pick up from the media I wasn’t missing much as Wanted received a bit of a pasting. Paul Weller had come in for bit of stick and times over the previous ten years but the extent to which this was now prolonged and indeed the venom involved was unprecedented.

So I didn’t help Wanted on its way to #20 in the singles chart. It was a song that neither moved nor annoyed me. It was something I heard occasionally on the radio or caught via a TV appearance as the band worked hard to give it some exposure. It did better than the unlamented Waiting but it was still one of the poorest performing singles thus far, which in a sense is a back-handed compliment given we are dealing here with a Top 20 single – the twelfth to achieve that feat…….and as it turned out, the last:-

It’s not awful.  But it’s not great.  It just doesn’t seem to be worthy of the great stuff Paul Weller had been churning out in what had seemed that an effortless way the previous ten years.

Two tracks were on the b-side of the 7″ single – the same song but one with a vocal.

Indeed, it was a re-tread of the title song from The Cost Of Loving album released some nine months earlier, but where the original had been lumpy and uninspiring, the new version harked back to the sort of music that the band had made in and around the era of the debut album some three years back. Having said that, I only discovered this when I picked up a second-hand copy as recently as 2013…..

It was a pleasant surprise to hear something this decent on the b-side more than quarter of a century on.

I’ve since learned that The Cost was a piece of music composed as the theme tune to a film entitled Business As Usual that had been released in 1987. I’ve no recollection of the film despite it being described as an anti-Thatcher film with high-profile stars in John Thaw, Glenda Jackson and Cathy Tyson.