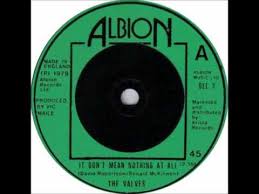 The Valves were one of the early punk groups from Edinburgh, Scotland. The band, cfeatured Dave Robertson as Dee Robot on vocals, G. Dair / Teddy Dair aka Gordon Dair on drums, Gordon Scott or Pada on bass guitar and Ronnie Mackinnon on guitar. The band was originally called Angel Easy and were a pub rock group.

The Valves released three singles before breaking up:-

I’ve got a second-hand copy of the final single:-

But if there’s one song they are most remembered for it was the b-side of their second single:- 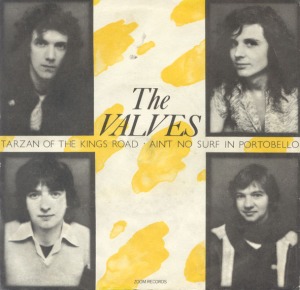 mp3 : The Valves  – Ain’t No Surf in Portobello

Some of you may very well wondering where the hell is Portobello. Wonder no more…..