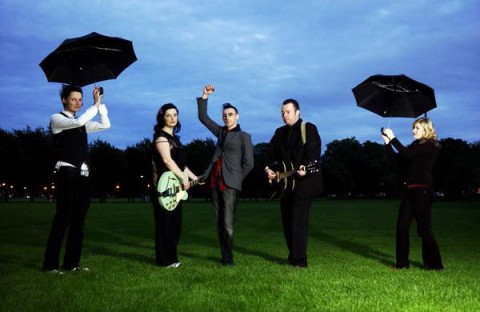 I’m quite bemused that I’ve never featured Saint Jude’s Infirmary on the blog before.  I was sure I had done, but I’m guessing it was over at the old place pre-2013.

They were championed by the acclaimed painter Jack Vettriano, and indeed he went as far to say that he found their music ‘inspiring’. This had come about after he learned that the group had composed a track called Goodbye Jack Vettriano,  written by Grant Campbell while he was living abroad and feeling homesick saw a Vettriano print on the wall of a pub in Rotterdam.  The painter would work with the band on a video for the song and later would create a new self-portrait which was later used as the cover for the band’s second album, This Has Been The Death Of Us, which followed in 2009.  The latter album also featured contributions from the author Ian Rankin (who I know is a favourite of JTFL over there in Santa Monica).

The music?  It’s actually quite hard to pin down.  They described themselves in an interview back in 2007 as ‘noisy, modern European folk music’, in which they also cited their influences  as being The Velvet Underground, The Jesus and Mary Chain, The Replacements and Tom Waits, along with stoner rock and krautrock, which really is a helluva melting pot.

They were always a complex band to try and get to grips with.  The live shows were often excellent, but at other times were tense and difficult affairs with very little on-stage chemistry despite the fact Grant and Ashley were siblings, and Emma was a cousin to both of them.

Mike from Manic Pop Thrills was someone who got right behind the group from the very earliest days, going as far as promoting a show in 2009. He obtained a wonderful interview just prior to that….and I’m reproducing some of it here:-

Q – If people don’t know you, what can they expect from the gig?

We are from Edinburgh and play slow and brutal poetry. The songs are of sad eyed remorse sung by throats cried hoarse. The girls sing sweet, the boys sing coarse, the girls weave honey, the boys pick sores.

Mark: After a tortuous and seemingly endless wait, we’ve just released our second album. We’re taking a big collective sigh of relief, and rounding the year off with gigs in Liverpool, Dundee and Edinburgh.

Q – How would you describe the difference between the new LP and the first one?

Grant: If the first album was us caught on a train platform desperately trying to convince a lover to stay, then the second album is us trying to write the great Scottish novel in 5 chords and a wall of reverb, or else die trying. We wanted a record that would be as Scottish and as poetic as Rabbie Burns, Hugh McDiarmid or Kenny Dalglish. We want each song to sound like a silver bullet in the revolver of the album. Bang! Bang! Bang! It’s art and poetry and hope and dreams drilled and filled into deadly munition. We have built a gun to hold to our head and are daring the world to shout fire.

The admitted to difficulties with the recording process for the second album boiled over to the subsequent promotional tour and indeed the band split-up after that Liverpool gig. There was a comeback of sorts in 2016 with a gig in Edinburgh, and at the time suggestions were made that new material was likely to be recorded in the near future. But nothing transpired.  Who knows what lies ahead……..

And in an effort to make up for the previous absence from the blog, here’s a handful of tunes:-