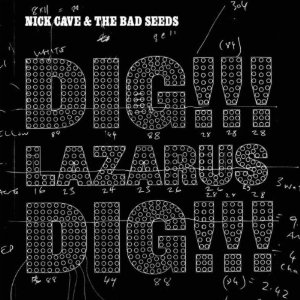 Nick Cave was a truly creative force in the first decade of the 21st Century, releasing an album every 18 months or so with the backing of The Bad Seeds or with the Grinderman offshoot. It is a body of work that, due to its volume, doesn’t always quite hit the mark in comparison to the material from the 80s and 90s but it is never less than fascinating to listen to, especially in the live setting where he and his band established themselves as one of the must-see acts with every tour bringing something different thanks to the revolving door policy of band and tour members.

One of my favourite songs of his is the lead-off single from the 2008 LP:

It bounces along a right old pace, paying homage to the sort of more direct tunes that Grinderman had been performing in the previous couple of years – in particular the call and chant nature of the vocal – and has a chorus that was tailor-made for A-listing on daytime radio. Except, this is Nick Cave and unless he duets with Kylie or Polly Jean then there’s no chance of ever hearing him outside of Radio 6….

Ever wondered what the hell this crazy cut-up vocal is all about? The great man explained all at the time of its release:-

Ever since I can remember hearing the Lazarus story, when I was a kid, you know, back in church, I was disturbed and worried by it. Traumatized, actually. We are all, of course, in awe of the greatest of Christ’s miracles – raising a man from the dead – but I couldn’t help but wonder how Lazarus felt about it. As a child it gave me the creeps, to be honest.

I’ve taken Lazarus and stuck him in New York City, in order to give the song, a hip, contemporary feel. I was also thinking about Harry Houdini who spent a lot of his life trying to debunk the spiritualists who were cashing in on the bereaved. He believed there was nothing going on beyond the grave. He was the second greatest escapologist, Harry was, Lazarus, of course, being the greatest.

I wanted to create a kind of vehicle, a medium, for Houdini to speak to us if he so desires, you know, from beyond the grave. Sometimes, late at night, if you listen to the song hard enough, you can hear his voice and the sad clanking of his chains. “I don’t know what it is but there is definitely something going on upstairs”, he seems to be saying. It is, most of all, an elegy to the New York City of the 70’s.

Incidentally, the version of the song put on the blog is the limited edition 7″ single version, which comes in at some 32 seconds shorter than the album version (that’s the anorak in me coming to the fore I’m sad to say).

NOT a cover of the Elvis Costello classic, although that didn’t stop EC’s folk a few years back issuing me with a dmca notice (over the old blog where these things were a regular occurrence) demanding that the Nick song be taken down – I knew it was from EC’s folk as the other three songs the notice referred to were all from a posting to do with him!!

One thought on “REPEAT POSTING WEEK : LARRY AND HARRY”