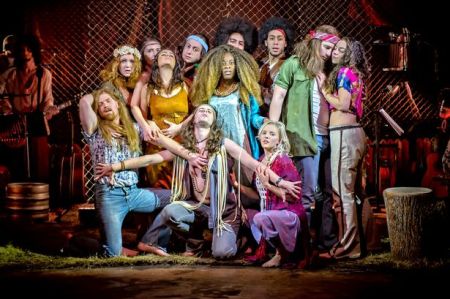 Elaine Paige Can Get to France : (A cool AF tribute to Musical Theatre)

ACT TWO of the guest posting by STEVE McLEAN

I Got Life – Nina Simone (from the musical Hair)

Hair. Again! It’s awesome. The show is a pretty well intended attempt at a counter culture, anti-war musical that got out of control. I believe it was written as it evolved on stage which brings it closest to the high art end of the theatre spectrum.

I’m not gonna take the piss here. This song is out-and-out boss. Another Hair classic that has had the stageyness stripped away to reveal a marvel of the number. Plus she sings ”boobies” out loud in place of the ‘tits’ from the show and for that alone it’s a dream. I only like words for breasts if they can be spelled on a calculator turned upside down.

So the Show Boat version from the film(s) is much slower and less raunchy. Bjork gives us a rendition more akin to a ‘jazz club standard’. Show Boat the musical has been the subject of much debate over the use of what many feel are derogatory racial slurs in the original text.

It’s worth noting that most of these slurs were changed for the film versions of the 1930s and 1950s and for the stage revivals. Have you ever had an argument with a knuckle dragger who believes that the world is either ‘woke’ or ‘PC gone mad’? Did they mention that ‘you can’t say anything these days’ especially around Christmas about a certain Pogues song? Then you can tell them about the ever evolving Show Boat musical and how what they perceive to be political correctness is just being considerate to the feelings of others AND what they seem to think as ‘these days’ has been going on since at least the 1930s! That’s right the 1930s! So the lefty-woke-mafia haven’t in fact ‘taken over’ in almost 100 years. I digress.

This song may serve as a prototype for Bjork‘s take on Oh So Quiet. She over eggs the pudding slightly, but it does make you yearn for more. It’s time she packed away all the bleeps and boops and loops and did a six-month residency at Ronnie Scott‘s with a piano, drummer and double bass…

I Feel Pretty – Little Richard (from the musical West Side Story)

West Side Story hangs over musicals as template for the good guys / bad guys / bad guys who are good guys and finger clicking. It’s Romeo and Juliet but with the name changed (See! It used to happen all the time. If only The Only Fools and Horses musical had been called ‘We Need To Find A Way To Keep The Christmas Merchandise Deals Now John Sullivan Has Passed Away’…. Dream it and it will happen)

Little Richard was born to sing this song, he makes this into a stomper with his backing singers offering up a call and response. He recorded it for a West Side Story tribute album in 1996 from which he is clearly the stand out contributor. The other really notable song is “Gee Officer Krupke” – Salt N Pepa, Def Jef, Lisa “Left Eye” Lopes, The Jerky Boys & Paul Rodriguez... which surely could have had the acronym of SNPDJLLELTJBAPR. Beware though if you buy the album, the last track is by Phil Collins.

Did You Evah? – Debbie & Iggy (from the musical High Society)

High Society is an adaption of Philadelphia story, but the song first appeared in the musical Du Barry Was a Lady. The story goes that they had all but finished filming and the studio realised that the two stars didn’t have a duet, so Bing Crosby and Frank Sinatra were called back to add in this number. To be honest, it’s not a great story. You’d expect a story with Bing and the Chairman to have more martinis, some form of party and Deano ‘n’ Sammy stealing the show again. They can’t all be zingers I guess.

The updated version from Debbie and Iggy really hits the spot. You can tell they’re having a blast, and you can tell they’ve known each other for years. It’s SWELLEGENT!  The song was recorded from an HIV Awareness album called Red, Hot and Blue which took famous Cole Porter songs and reimagined them.  As with the West Side Story album mentioned above, it’s patchy. Sinead O’Connor‘s take on You Do Something to Me is worth your time but you can happily ignore the U2 and Lisa Stansfield contributions. Lisa Stansfield AND U2, can this get any more Chart Show?

Trust In Me – Belly (from the musical The Jungle Book)

The Disney adaption of the Jungle Book is pretty definitive, right? There’s nobody making a case for the straight to VHS versions or the various live action remakes?
This sultry number by Belly (and recently featured on a nifty RSD compilation of B-sides) is possibly the template for the Scarlet Johansson version in the live action remake. This is a pretty timeless take, and it has a swagger with elements of Peter Gunn style cool, yeah I can write the music-y words when I want. It does have a menacing lead guitar that you screams Joe Meek. Disney never sounded so raw (not true, the Black Hole soundtrack is fucking bleak).

Aquarius / Let the Sunshine In- 5th Dimension (From the musical Hair (again!)….

To round us off we’ve come full circle and gone back to Hair. Not just Hair but the song we started with. Let’s be brutally honest, this version of Aquarius is annoying as fuck. I love the 5th Dimension but Jesus this gets on my tits.

Once you get over the hippy tedium…  well, to paraphrase Ian Watson of How Does It Feel To Be Loved ‘Let The Sunshine is the reward for getting through Aquarius…’ he was spot on too. That bass line! It’s so big! A psych soul hippy freakout. Play loud and try not to dance. You can’t, can you?

While I was digging around these I came across a load of others. Aside from the two tribute albums mentioned in above, there’s stuff like Siouxsie and The Banshees doing their own take on Trust in Me and Sparks did a great version of Do Ri Mi. There’s enough to do a second list.

But perhaps I’ll write about musical theatre stars who have recorded pop songs that you might not have expected. Did you know that John Barrowman covered Every Little Thing She Does Is Magic? Or that Tim Curry recorded a great version of Baby Love? Elaine Paige made a whole album of Queen Covers?

I know what you’re thinking ‘That sounds fucking shit’ and you’d be right. Seriously, go listen to her version of Radio Gaga and then cut out your short term memory….. But bless her for trying.

6 thoughts on “THE TRIBUTE TO MUSICAL THEATRE (ACT TWO)”