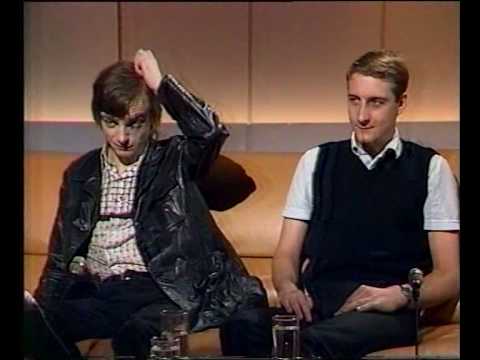 This posting has been in the pipeline for a while and I ended up pushing it back a couple of weeks as it makes for a neat postscript to Steve’s guest post on The Graveyard Shift.

I think it is fair to say that Marc Riley‘s departure from The Fall, and his subsequent success as a performer and broadcaster, got under the skin of Mark E Smith.

These are the words of Riley, in an interview given to an on-line publication back in 2013:-

And I think part and parcel of it is that if anyone left The Fall he wanted them to sink without trace, as if to say, ‘Without me they’re nothing.’ His contempt for musicians is well known….

So what rankled Mark more and more was that I just wouldn’t go away, even to the extent that one day he was driving to the train station and there was a massive billboard with Mark Radcliffe and I on it… it probably made him want to drive his car straight into the canal, because there’s this bloke from his past who just won’t go away. But I’m not a thorn in his side, he’s got a lot going on in his life, and he’s a very clever bloke, but he does say things for effect. But me and him had ding dongs in the press, and it was just so childish it was untrue, and we wrote songs about each other. I wrote ‘Jumper Clown’ and he wrote ‘Hey Marc Riley’ and ‘C.R.E.E.P.’, and so on. It was daft, really.

Jumper Clown was the second 45 to be released by Marc Riley after he left The Fall. It came out in 1983 and the tune, or a version of it, had originally been part of the setlists of live gigs by his old band in 1979. It was an untitled instrumental and the band never got round to recording a studio version. His version was recorded with a group of mates who would later become known as The Creepers, with the title very much aimed at Smith’s consistently disheveled appearance (this was all prior to Brix appearing on the scene and smartening him up)

Hey! Marc Riley was another song that The Fall would incorporate into their live sets in 1984/85 but again, it wouldn’t be one that would ever seemingly have been recorded in the studio. It would take until 2007 before anything other than bootleg copies were available, thanks to a live version, recorded at Oskars’ Cornhusker, Azusa, California on 23 May 1985, was included in a Box Set.

Four years later, an omnibus edition of This Nation’s Saving Grace which also included rough mixes, outtakes and other newly discovered recordings from the era, offered up two versions of a song whose title had been shortened

It has since been revealed that the studio version, which was produced by John Leckie, had been considered as a possible b-side to Cruiser’s Creek.

The Wedding Present offered up a kind of surf/TWP hybrid of The Creepers song as a b-side to It’s A Gas, released in 1994

3 thoughts on “SONGS FROM A SPAT”