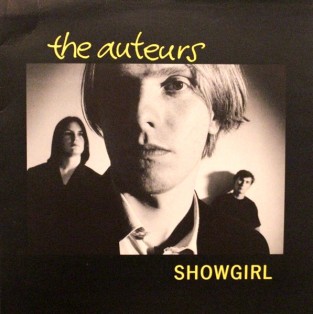 I’ve decided that The Auteurs should be the next act for the Sunday singles rundown, followed by some Luke Haines solo 45s. I won’t be including The Servants or Black Box Recorder, both of which were very fine bands that had Haines in the line-up, on the basis that he was part of a collective rather than the main focus of attention. Another side-project, in the shape of Baader Meinhof, will almost certainly feature…..

For those of you who aren’t immediately familiar with this bona-fide maverick genius of the UK music scene, I’ll use the opening post in the series to set the scene.

Luke Haines was born in London on 7 October 1967. Like many other talented musicians, he tried getting a band going, on more than one occasion, while he was still at school. But it took until he was almost out of his teens before he found himself in a studio when he contributed guitar and piano to the six tracks on the debut solo album released by David Westlake, who was the frontman of indie band The Servants, whose first two singles had been well received by the music press and had found favour with John Peel.

Haines then officially joined The Servants in 1987, appearing on two excellent albums – Disinterest (1990) and Small Time (1991) – although the latter wasn’t actually given a commercial release until 2012 and only after the former had been cited by Mojo magazine, in December 2011, as one of the greatest British indie records of all time. The failure to obtain a contemporary release for Small Time led to the break-up of The Servants at which point Luke Haines made his move to front his own band.

It wasn’t actually meant to turn out that way, judging by an interview Haines gave in 2016 in which he revealed he had wanted to make a solo record but realised he needed a band to play the songs live. He enlisted his girlfriend Alice Readman on bass and his friend Glenn Collins on drums, playing gigs in all the small venues that made up the scene in London and at which you would inevitably find one or more journalists looking to ‘discover’ the next big thing to write up.

There was something of a fuss about the band, to the extent that they were able to go into a studio as an unsigned band and put together a debut album, safe in the knowledge that their management were conducting a bidding war which was won by the relatively new Hut Records, an indie label that was in fact wholly owned and bankrolled by Virgin Records.

Showgirl is a very fine debut, one which benefits immensely from the use of the cello, played by James Banbury who would, in due course, become a full-time member of the band. It is, looking back, quite a strange selection for the debut 45 in that it wasn’t really commercial enough to ensure widespread radio play, but it was one which would still enable the muso journalists fans to talk up the band and their potential, pointing out that that they were a cut-above and totally different from so many of their peers making music for indie labels. Yes, there were guitars and there was a distinctly English-type vocal delivery, but the subject matter was off-kilter and distinctly un-rock’n’roll. It very much worked as an appetizer for the release the following month of the debut album…..

Also worth mentioning that the two b-sides are well worth a listen with The Auteurs, akin to Suede (the band the media most often linked them to) wanting to offer up quality tracks on each single so that they would be enjoyed and treasured by fans.

7 thoughts on “THE SINGULAR ADVENTURES OF LUKE HAINES (1)”