I’ve made up my mind on the next Sunday series, but it’s one that will take a fair bit of time and effort that I can’t afford just now and so I’m putting it off till after the conclusion of the ICA World Cup.  In the meantime, Sundays will be used to host some old posts rescued from what remains of the vaults of the original Vinyl Villain blog before the bastards at Google pulled it down without warning.

NOT BAD FOR AN AULD FELLA… 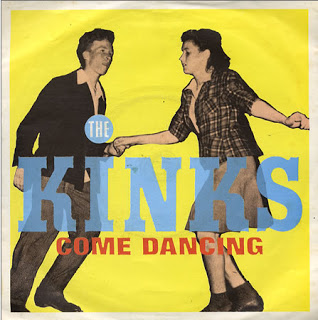 In my late teens I was never really one for looking back at bands or singers of days of yore. As far as I was concerned, the music of today (whether that be 1979, 80, 81 or whenever) was all that ever mattered. There’s no way you would ever catch me listening to stuff that my mum and dad liked.

As I matured somewhat in my later years, I realised that it would be a nonsense to maintain such a hardline approach, and now there are some acts from the 60s and early 70s that I have a soft spot for. But not The Beatles. Or Elvis Presley.

This single from late 1982 had a lot to do with it. Sure, I knew that The Kinks were a band name checked by so many of my own rock/pop gods, not least Paul Weller, and while I knew quite a few of their old singles from hearing them played on the radio, I hadn’t ever bought anything by the band.

My purchase of Come Dancing wasn’t taken lightly. It was a single that I had initially dismissed on the first couple of hearings, but then its catchiness just embedded itself in my brain and I found myself singing it out loud, even when it wasn’t being played on the radio. But could I bring myself to own something from a band that had enjoyed their first hit when I was crawling around wearing little more than a nappy? Of course I could…..

This was the band’s nineteenth single to hit the UK Top 20, but their first in over a decade.

Back in 1982 I was genuinely amazed that a band formed in 1964 was having hits so many years later and I reckoned there was no way any of today’s stars will go on that long. I mean it was still another 18 years to the new century and that was a lifetime away….bands like New Order, The Cure and Echo & The Bunnymen just wouldn’t have that staying power.

I got that one a bit wrong didn’t I?