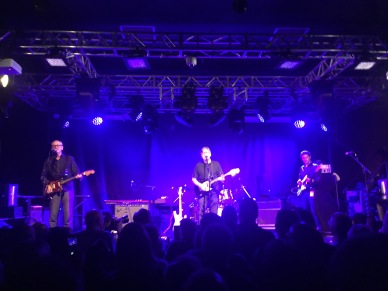 A few months back, Teenage Fanclub surprisingly announced that the Liquid Rooms in Edinburgh was to be the sole Scottish date on the short UK tour to support the impending release of Here, the band’s tenth studio LP but just their second in the last eleven years. This is a band who can instantly sell out some of the largest venues in Scotland and who, whenever appearing on an outdoor stage at a festival, will attract numbers in the many thousands no matter who is on at the same time elsewhere in the field. And yet, this 600-capacity basement venue is where we find ourselves packed into on a sticky September evening.

Now let me make it quite clear from the outset; this particular has long been a favourite location of mine. It is just the right side of intimate and offers options to stand downstairs or up above on a balcony. It’s more or less a square shape and the sight lines to the stage, other than at the very back, aren’t affected by unsightly pillars. It also, especially since a major refurbishment some six years ago after a devastating fire, has an excellent sound system.

But it is a venue that is always, without fail, incredibly stifling thanks to its basement location in an old stone church that seems to just absorb the heat. And when it sells out, there is next to nothing left in the way of breathing room. This is all fine and dandy when it is a young band attracting a young and predominantly thin audience where there will always seem to be a little bit of leeway. But the average age, and the ever-increasing average waist/dress size of a more mature audience such as would be typical at a TFC gig was always going to generate ridiculous amounts of bodyheat.

I got there in time to catch the support.  I don’t like using this place to knock or criticise new and emerging bands as they collectively always have more talent than 10,000 maniacal bloggers called Jim could ever conjure up. So I’ll simply say that the four-piece band from Glasgow who opened proceedings weren’t my cup of tea but there were others were quite taken by them. The 45-minutes were endured but with the consolation that I had got there early enough to bag a great spot from which to watch the main attraction.

TFC bounded on at the stupidly early time of 8.30pm as there was a curfew of 10pm – I’m told this might have to do with the venue often doubling up a dance club in the late evenings/early mornings rather than the crazy licensing laws in the capital on the 49 weeks of the year that the Festival and Fringe aren’t hanging around.

TFC bounded on (yes, they really did with all sorts of energy, enthusiasm and smiles) and went straight into Start Again to huge acclaim at the end of which Norman thanked everyone for coming along and said that the show was going to feature songs from every album except one (which in the end turned out to be The King). In keeping with the democratic nature of the live shows, they then went into Don’t Look Back followed by About You, thus allowing Gerry and Raymond to take lead vocals and in doing so ensured the show hit a high spot from the outset.

And over the next 90 minutes, it rarely deviated from that level with no alarms and no surprises.

There’s just no way to find fault with a set that relied most heavily on Grand Prix and Songs From Northern Britain, their two biggest selling and most enduring works in which they really nailed the trick of killer choruses via warm harmonies and great melodies. The four new songs were aired at really appropriate times being wrapped around an achingly beautiful Ain’t That Enough mid-set; they closed with Sparky’s Dream and The Concept , and yup, it was the full 8 minute version of the latter that could have gone on for twice as long and still not bored anyone.

And then they came back for a three-song encore : I Need Direction, Can’t Feel My Soul and Everything Flows.

No wonder all 600 of us exited back up the narrow staircase and out into what was now a drizzly yet still hot evening wearing the widest of grins and using one-word descriptions like amazing, stunning, incredible, awesome, wonderful, astonishing, extraordinary, stupendous, phenomenal and outstanding.

Or perhaps it was best articulated by a complete stranger who came up to me as I waited on the friends who were generously giving me a run home and so letting me avoid the misery of engineering works on the railway line back to Glasgow – ‘that was fuckin’ magic big man – no wonder we’re all smiling like we’re on ecstasy!’

2 thoughts on “BONUS POSTING : FEEL GOOD HIT OF THE SUMMER”