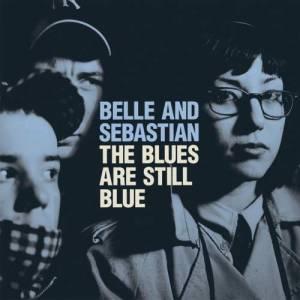 “…..this song, funny little frog, might be the worst song ever recorded. by anyone. ever.”

“The Blues Are Still Blue” was the second single from the Belle & Sebastian’s The Life Pursuit. The track was released in April 2006 on Rough Trade Records, and is produced by Tony Hoffer. The single reached #25 in the UK singles chart.

The wiki entry is very abrupt in comparison to many of the other singles.  And no wonder, as it’s a travesty of a 45.

There were a number of possible candidates for the all-important follow-up single after the album had been released to mostly positive reviews, but very few of which considered it to be the band’s finest body of work.  It was generally considered to be a 3/3.5 out of 5 body of work which was, to the casual listener, probably a generous mark if you were going purely by The Blues Are Still Blue, with its nonsensical lyric set to a tune that seems a partial tribute to glam rock.

I just can’t find anything endearing about it.  All of which means I didn’t buy the 45 at the time  – again released in CD, 7″ and DVD format  – and so as I find the tracks out there on the internet, it will be the first time I hear them.

mp3 : Belle and Sebastian – The Blues Are Still Blue

Strange that the track after which the album was named was reduced to being an obscure b-side when in fact it is much more obvious a B&S number than many of its contemporaries; it’s certainly better than the a-side

Please make it stop.  A pastiche of Paul Simon‘s Me and Julio Down By The Schoolyard is what comes to mind.  Or a ‘comedy’ number by your in-house entertainment crew on an 1980s package holiday

mp3 : Belle and Sebastian – Whiskey In The Jar

Limp and lifeless and pointless cover of a cover in a nod to the band referenced in I’m A Cuckoo.  Oh dear.

The DVD had a live version of Roy Walker, again taken from the Botanic Gardens gig of June 2012.  I can’t be bothered to track it down.