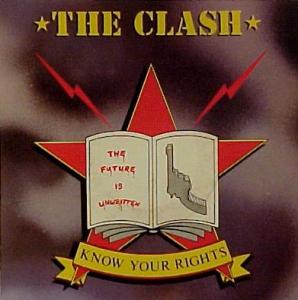 Disc 16 is Know Your Rights.

April 1982.  And just when you thought that The Clash were incapable of any new surprises, they hit hard with the release of what turned out to be the first of three singles that would be lifted from Combat Rock.

Maybe they were just fed up of not being able to articulate their message properly with a music press that were no longer fans (for the most part) or maybe it was just a bit of piss-taking from Joe aimed at those who had dismissed This Is Radio Clash as sloganeering even before hearing a single note.  But it takes a big set of balls to scream out that what follows on record is ‘a public service announcement………………..WITH GUITARS!!!!!’

Yup, it’s time to throw away the funk, disco and reggae and get back to some good old-fashioned noise to what is suspiciously akin to a rockabilly beat.  But it was exactly what we were needing.

I’m a big fan of this song, and think it is one of the most underrated of the singles.  It was a throwback to the angry, disenfranchised band of old. It only came out on 7″ vinyl – no extended remixes for this track – and it even had a b-side that name-checked London just like so many songs of old.  The infatuation with America was seemingly over and it made me believe that the forthcoming album was going to be 45 minutes of pent-up aggression unleashed on a listening public.

Got that wrong didn’t I?

Years later, the early versions of the songs that made it onto Combat Rock became available in bootleg form.  It is interesting to hear how the lyric is delivered with a far more cynical rather than angry tone.  It’s also a couple of minutes longer than the version that was eventually publicly issued…

For me it’s all about the first ten seconds of ‘Know Your Rights’.  The way Mick Jones bashes his guitar  and then Strummer shouts “This is a public service announcement/With guitars!” That’s the whole reason why The Clash existed right there. It’s a massive influence on what we’re going with Radio 4.

As a kid growing up in America, ‘Combat Rock’ was everywhere. MTV had just started and the video for ‘Rock the Casbah’ was on all the time. All the kids at school loved it but ‘Know Your Rights’ was the one for me. It’s the ultimate synthesis of all their influences, from reggae to punk through R&B to soul.  Musically, it sounds really urgent, as if they were keen to tighten things up.

Maybe they were conscious that they’d lost a few people en route with ‘Sandinista’ and wanted ro strip the sound back to bare bones.  The lyrics are spot on: “Murder is a crime/Unless it is done by a politician or an aristocrat”.  Someone could release ‘Know Your Rights’ next week and it would still sound relevant.  It’s timeless.