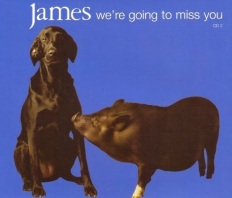 Apologies to those who don’t like James for them featuring two days in a row. But I had intended to have this series wrapped up well before now.

Yesterday’s single was the last of the James singles that I have in my collection. I did have a few gaps that I’ve plugged since beginning this series back in November 2013 and while it was tempting to chase down the final CDs via ebay/discogs etc I decided against it and instead hunted down whatever songs I could find online.

We’re Going To Miss You was an unexpected third single lifted from Millionaires albeit the track was re-recorded for release as a 45. However, the record label again seemed to mess things up by shoving it out just before Christmas 1999 when the airwaves were full of the usual cheesy numbers that abound at the time of year as well as filling time with a look back at classic pop songs of the 20th Century as the new millennium was just over the horizon. As a result, the single completely stiffed and for the first time in seven years the band missed out on a Top 40 placing:-

The next and final physical single appeared in June 2001. It was the only single lifted from the album Pleased To Meet You. The single preceded the album by a week and was released at the end of June 2001.

It reached #22 in the UK charts. An anthemic number that, at the time, was dismissed as very much James by numbers and used to demonstrate just how tired and cliche-ridden they had become.

Six months later, James called it a day but signed off with a triumphant tour of the UK’s main arenas culminating in a gig in Manchester that was later released as a live album.

The band reformed in 2007. There have since been three singles released as digital downloads – Whiteboy, Waterfall and Not So Strong – none of which charted.

And that, dear readers brings the series to a close.

Next up, and in response to the positive feedback the other week, will be a short series looking at ten singles released by Altered Images.