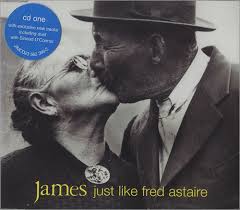 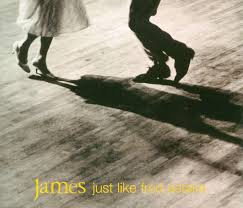 I’d be amazed if anyone who was into James circa 1985 – with songs like Folklore, What’s The World and If Things Were Perfect – would ever have imagined they would g on to write and record what can only be described as an MOR love song such as Just Like Fred Astaire some 14 years later.

By all accounts, I should hate this song.  It is sentimentally soppy and tune wise it is the sort of thing that you would imagine would be handed to the winner of the X Factor or The Voice to grab hold of and release on the back of them winning the vote of the general public.  But, just like the Four Tops (and Orange Juice), I can’t help myself….and have to confess to having a real affection for this particular single.

There’s a place in the world for outstanding love songs and James, having previously delivered an absolute belter in Sometimes back in 1993, managed to deliver another one right here.  It the sound of a band comfortable with their place in the world – the success of the greatest hits package had finally put any money worries firmly to bed – and the notion of making new and innovative sounding music can now be left to others.  It is mature, grown-up music that in the hands of others could border on boring, but thanks to the collective talents of all concerned, they manage to pull it off:-

It was released on 2 x CDs in October 1999 and came with three completely new tracks plus a re-working of a track from the Laid LP:-

The first of these features a contributing vocal from Sinead O’Connor and is one of those songs that you listen to and wonder why the band chucked it away on a b-side. It’s another mid-tempo ballad but it is quite unlike anything else the band ever recorded and, with its catchy chorus could easily have cut the mustard as a single.

Long To See is a real slowie that relies heavily on Tim’s vocal to make it of real interest while Mary sounds like an outake from the Whiplash era, so if you liked that sort of song you’ll fall for its charms.

Goal Goal Goal is a real oddity. It takes the tune of Low Low Low but the new lyric is football related. The story is that the band were keen to have it adopted as the official anthem of the England Football Team at the 1994 World Cup taking place in the USA – after all, New Order had enjoyed a #1 hit with World In Motion at the previous tournament four years earlier. The problem was, England failed to quality for the 94 Finals……

The song was however, put on an excruciatingly awful album called Gloryland, released by the football authorities to commemorate the tournament. To give you an idea of how bad this record was – Queen, Jon Bon Jovi, Tina Turner, Fleetwood Mac, Scorpions, Daryl Hall and Santana are among those who feature. The band however, five years on, dug it out and shoved it on CD2 of Fred Astaire.

The two CDs do make for a decent enough package but the record label made a huge error in releasing the single just one week before the LP Millionaires. It did hit #17 in its first week on the back of solid amounts of radio play and the band carrying out promotional duties on UK television but the type of record buyer it was aimed at would have bought the LP when it came it out rather than boost the sales of the single.

It remains the last time that James went Top 20 in the singles chart.