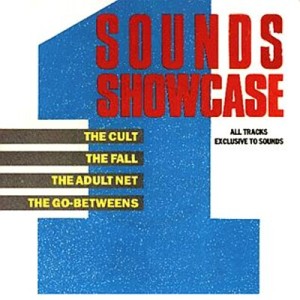 Of the quartet of WEEKLY music papers that were available in the UK back in the 80s, Sounds was my least favourite, mainly as it seemed more often than not to be aimed at the heavier end of the rock market.  And yet, history shows that during its existence (1970 – 1991) it was often at the forefront of things ahead of the more renowned New Musical Express (NME),  Melody Maker and Record Mirror – for instance it was the first of the three to give coverage to punk.

While the mid 80s saw the NME keep a reputation for reporting on and ‘breaking’ new scenes, Sounds began to increasingly concentrate on in-depth coverage of indie bands on major labels and less and less coverage to new or emerging groups.  Allied to this was a series of vinyl giveaways with the paper, the first of which, in early 1987  was associated with Beggars Banquet under the title of Sounds Showcase 1:-

Here’s what was said on the back of the EP:-

After a lengthy absence The Cult return in prime strength to re-affirm their position among the world’s best rock groups. They’ve been recording their third album in New York with Rick Rubin producing, and have stripped down their sound to barbed-wire force. Outlaw is work in progress from these album sessions – the long-awaited new album will be aptly entitled Electric.

Not the recent single version, but the original John Leckie recording of the track, which presaged the staging of Mark E Smith’s play of the same title.  Last year celebrating ten years of The Fall, this sparkling yet sinister track shows their continuing ability to surprise and stimulate with every release.

With a string of critically-acclaimed albums behind them, The Go-Betweens continue to produce distinctive quality pop songs, under the guidance of Robert Forster and Grant McLennan. I Just Get Caught Out, specially recorded for this EP, is no exception, and heralds their new LP for April release.

This is the first time The Cult have appeared on this or the old blog.  It will be the last time cos they really are shit.  Outlaw is bloody awful.

The Fall track is different enough from the single version to make it an interesting listen, while The Adult Net is a reminder of how close that band sounded to the poppier version of The Fall that was kicking around at that time…..which is of course no surprise as The Adult Net were The Fall without Mark E. Smith (except when he guested on their records as Count Gunther Hoalingen)

The Go-Betweens would later re-record this great bit of music and make it available on the Tallulah LP:-