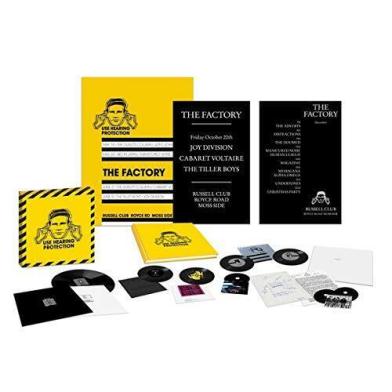 The first post on the contents of the Hearing Protection : Factory Records 1978-79 box set, was on 24 March 2022.  I hadn’t intended it taking this long for the series to come to its conclusion, especially as there was only ever going to be ten parts, but having covered all of FAC1 through to FAC9, I didn’t think it would be right to do anything in depth on FAC10 while Joy Division were competing in the ICA World Cup.

FAC10 is in the above picture in the front row on the left-hand side. It is, of course, the album Unknown Pleasures.

I’ve long had a copy of this album, originally released on 15 June 1979. I bought it a few months after it came out, on the back of falling very heavily for the single Transmission.  I haven’t taken good care of it.  The vinyl itself isn’t actually too bad, but the sleeve is bashed, battered and creased, and the edges have splits to the extent that the info is unreadable.  I get quite embarrassed when I look at, with the realisation that I have played loose and free with a wonderful piece of art.

I now have a second copy of Unknown Pleasures, thanks to it being part of the box set that I bought when I visited the Factory Records exhibition that was put on at the Manchester Science and Industry Museum in the latter part of 2021.  It is not a replica of the original album, instead being the reissued and remastered version of the album issued by Warner Bros in 2015.

There is an on-line debate about the merits or otherwise of this particular repress, with many at pains to point out that it is actually a remastered version of something that had originally been remastered in 2007, meaning that the 2015 version was further compressed from digital files.  This has led to accusations that the differences in sound from the original are more than minor, and that the 2015 version is cleaner, punchier and at odds with what Martin Hannett wanted to deliver.

There is no question that the version of the album that came with the box set is different.  For one, it has no clicks or pops in the way that my 1979 pressing has succumbed to.  And yes, I find I do have to play it a little louder than I do with the original pressing, which is maybe the clearest indication that the two pieces of vinyl are far from identical. The thing is, I have ears which are almost 60-years-old and which are well past their best, (thanks, somewhat ironically, as a result of my failure to use hearing protection while DJing or going to gigs), so I’m not really best placed to outline the differences, other than to say that the remastered version feels/sounds as if I’m listening to things via a CD rather than a slab of vinyl.

Unknown Pleasures has become, with the passing of time, one of the most important and influential albums ever released.  I’ll be honest and say that when I bought it, I thought it to be a bit on the ‘meh’ side, as there wasn’t really anything that grabbed me in the same way that Transmission had. My excuse is that I was 16 years of age, and my musical tastes weren’t fully developed.  I won’t waste anyone’s time arguing the merits of its contents or otherwise, other than to say that no music collection, in my opinion, is complete unless you have a copy…..but I suppose I’ve got something of a cheek to say this given I’m someone who has nothing from Elvis Presley, The Beatles, The Rolling Stones, Led Zeppelin or Pink Floyd (among many others) in his own collection.

Here’s four tracks from the remastered album, all recorded at 320 kbps which is as good as I can do for you.  None of them made it to the Joy Division ICA:-