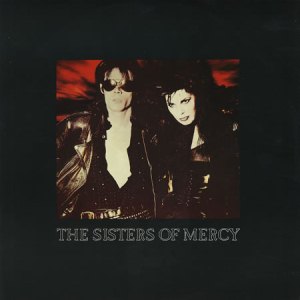 It’s more often than not that you’ll find this little corner of t’internet to be the comforting home of the three minute pop-song, often of the twee variety.

But, occasionally, I’ll drift into some unexpected areas.  Such as using this Monday morning slot to go deep into the cupboard to dig out and play what I’ll argue is THE greatest of all the goth anthems.  I have no idea how many years it’s been since I put the needle into the groove of this 12″ piece of vinyl, but let’s just say that even after given a good wipe-down, there was still enough accumulated dust that I had to stop the recording, carefully clean the stylus and start all over again.

mp3: The Sisters of Mercy – This Corrosion

As this blared from the speakers, a murder of crows made their way out of the nearby trees to nod their heads in unison and give approval to what they were hearing.  Or maybe that was just the side effects of the painkillers I’m taking to combat a sore back.

A #7 hit single in 1987, this version comes in at just over eight-and-a-half minutes, some three minutes shorter than the album version.  Produced by the late Jim Steinman, famed for his work with Meat Loaf, it really does have the kitchen sink thrown at it, including the 40 members of the New York Choral Society.

Admit it, you’re all closing your eyes and picturing yourself throwing all sorts of strange shapes to this in the confines of a very dark, cave-like subterranean club, possibly while Peter Murphy and Siouxsie Sioux look on approvingly from the VIP area.