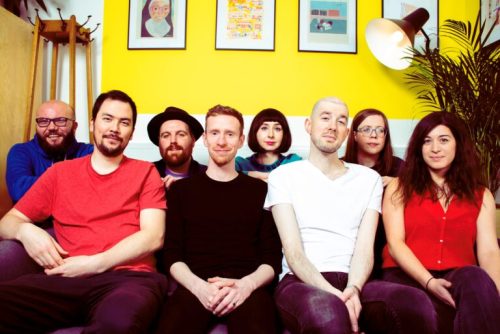 Today marks the start of the finals of the European Football Championships, originally meant to be played in 2020, but delayed by 12 months as a result of the impact of COVID 19.

As ever, songs have been written and recorded to mark the occasion, although the COVID restrictions have meant, thankfully, that no official songs featuring the players have been inflicted on us.  With the exception of World In Motion by England/New Order in 1990, and the kitsch/tongue-in-cheek back in 1982 of We Have A Dream by the Scotland squad, along with John Gordon Sinclair, one of the stars of the film Gregory’s Girl, all the official efforts have been appalling.

One of my favourite indie bands, Randolph’s Leap, has been getting some good local press for their new single, They Didn’t See Us Coming.  Here’s some words lifted from the press pack issued by Olivegrove Records:-

The lyrics for They Didn’t See Us Coming were penned by Adam Ross, the principal songwriter in the group who is based in St Cyrus near Montrose. He explained “I think music and football share a lot in common. They’re both valuable sources of escapism and have an amazing power to lift people’s spirits and help us connect with other humans. I think all of those things are really welcome and important right now.”​

Due to Covid restrictions, the song was recorded remotely and mixed in Glasgow by Randolph’s Leap keyboardist Pete MacDonald who even managed to incorporate Liam McLeod’s iconic, goosebump-inducing commentary from Scotland’s qualifying match. The SFA and BBC Scotland have granted permission for the band to sample McLeod’s voice which many will recognise from the nail-biting penalty shootout against Serbia, a play-off victory which sent the Scotland men’s team to their first major tournament finals since 1998.​

Scotland’s turbulent road to the competition is referenced in the song’s title They Didn’t See Us Coming as well as playful lyrics about “arriving fashionably late” (a nod to the team qualifying at a late stage via the UEFA Nations League route in November 2020). The chorus even pays brief homage to stadium-favourites “Doe-a-Deer”, “We’ll Be Coming Down The Road” and Baccara’s “Yes Sir I Can Boogie” which has become an unlikely anthem amongst the fans in recent years.​

“The song is a bit of an underdog anthem.” says Ross. “It’s about defying expectations but also remembering to have fun and make the most of these matches and the atmosphere that will accompany them. Who knows, it could be a while before it comes round again!”.

As the money raised from the single will be donated to a couple of well-deserving charities, (LEAP Sports is a Glasgow-based charity which aims to increase LGBTIQ+ representation in sport through work such as their ‘Football vs Homophobia’ campaign, while Street Soccer Scotland is  a social enterprise which uses football to tackle issues of isolation linked to poverty and social exclusion), I’m not going to post an mp3, but here’s a way to listen:-

I love the fact that the band have made a song that sounds like something from one of their albums, and in doing so have come up with a playful lyric which I think perfectly captures the mood of most of our fans in that we are perhaps unexpectedly in the finals, and we don’t really have any high expectations…..but in football, you just never know.

Here’s one I mentioned earlier.  I like to think of They Didn’t See Us Coming as being from the same genealogy:-

3 thoughts on “FINALLY, A HALF- DECENT SONG ABOUT FOOTBALL”