Accelerate is a very good album, a real blast. Each time I listen to it I get really into it. Just when R.E.M. had singlehandedly killed their career, they pulled off what was undoubtedly their best record in a dozen years. It’s the sound of a band who suddenly remembered where they came from, why they started a band in the first place and why people took to them from the get-go.

After the uplifting introductory track Supernatural Superserious, Hollow Man was released as the album’s second single on 2nd June 2008. It was the fourth track on Accelerate and starts as a bit of a come down after the high intensity of the opening triptych of songs, opening with Mike Mills at piano and Michael Stipe’s plaintive opening lines: “I’ve been lost inside my head / Echoes fall on me.”

Those last three words can’t be lost on you. Just like Lifes Rich Pageant, Accelerate is a short record and its opening tracks come at you with a ferocity you can’t escape from. Then they bring things down a notch. On LRP, the slower track is… well, you know.

Thing is, Hollow Man doesn’t stay down for long. It comes to life in the chorus in which Stipe pleads with us to reassure him that he’s not quite the lost soul he thinks he is:

For a mournful ballad, it’s a loud one! Another example of what Accelerate stood for – a band going back to its roots, eager to show they still cared and could produce the goods when required.

Hollow Man was the last time R.E.M. graced the UK singles charts. Well, that is if you count reaching number 200 as gracing the charts. And I don’t, actually. But it’s not important. There was just the one CD single. It included a live-in-the-studio track recorded in Vancouver. Horse To Water is one of Accelerate’s shortest, noisiest, fastest songs and this version rocks like the proverbial bastard. This could very well be the angriest, punk-sounding song R.E.M. ever made.

Apparently a second CD was planned for release in Europe (which as per previous releases usually included the UK), but for some reason it was cancelled. It would have included another Beat Happening cover, this time a track from their second album Jamboree. The original was sampled by Massive Attack for Teardrop and is rather Velvet Underground-esque in its minimalism and simplicity. R.E.M. turn it into a hazy, hypnotic trip, a sun-drenched psychedelic jam that sounds even more like the Velvets, especially during their extended coda. One of their best covers, one of their best b-sides. Such a shame it was never released.

JC interjects……The Robster supplied the mp3s when he fired over the words he’s written for today. This was the first time I ever heard the various songs not on the album.  Indian Summer is already barging its way high up into my list of all-time favourite R.E.M. recordings.  It’s really a relief that they stayed together for Accelerate and beyond as it would have been a tragedy to have bowed out after Around The Sun. 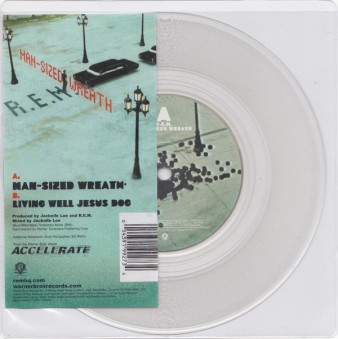 The third single from Accelerate, released on 11th August 2008, was another stormer. You know, they might finally have gotten the hang of this releasing decent singles malarkey. Man-Sized Wreath takes aim at the shallowness and the “pageantry of empty gestures” that permeate 21st century culture, politics and business. That’s how I hear it anyway. It’s got a quite brilliant couplet in the second verse that even for a songwriter of Michael Stipe’s ridiculously high calibre is quite a magnificent feat:

“Nature abhors dystopia but what’s between your ears?
Your judgement clouded with fearful thoughts, headlights and a deer. Ow!”

I love that lyric. No, I’m not being ironic, I really LOVE that lyric!

I mentioned last week the ‘working rehearsal’ concerts R.E.M. played in Dublin prior to recording Accelerate. As can be heard on the subsequent live album, Stipe had his doubts about Man-Sized Wreath.

“This next, new song will not be on our next record,” he tells the audience. “

“It’s a little early to make that call.” Stipe concedes that point before suggesting it could be a b-side, to which Mike Mills retorts: “There are no b-sides anymore, it’s all MP3s.” Well, that wasn’t strictly true…

Man-Sized Wreath was track two on Accelerate and made up a third of the frenetic opening to the album. It was followed by Supernatural Superserious, but it was preceded by what could very well be the best opening track on an R.E.M. album. And yes, I did write that even after considering Radio Free Europe, Harborcoat, Begin The Begin and Finest Worksong.

Living Well Is The Best Revenge was not a single, and for that alone we should be in mourning, but a live-in-the-studio version was included on the B-SIDE of a 7” single (the only physical format released in the UK), albeit with a different title owing to a daft question posed by Peter Buck at the start which results in much mirth from his bandmates.

There. That certainly blew away the cobwebs, didn’t it? WHAT. A. SONG! I mean, jeez – was this really the same band who recorded fucking Wanderlust???

Final proof that Mike Mills was wrong comes in the form of another live track released as the ‘b-side’ to the three-track digital download of the single. Another excellent version of a track from Accelerate.

It seemed R.E.M. were back at the races. Accelerate had the sound of a band with a new lease of life and many fruitful years ahead of them…