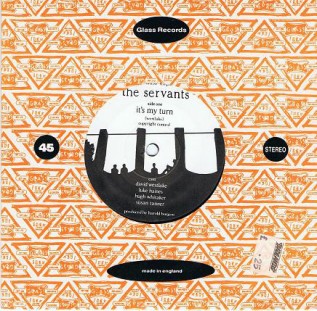 Back in 2015 I offered up a series, in 48 instalments, that looked at the tracks on the CD86 boxset been compiled by Cherry Red Records.  The post on 22 March featured this wonderful 45:-

mp3: The Servants – The Sun, A Small Star

The post went on, at length, to talk about The Servants, mentioning how they broke up not long after the release of this single.  Singer and main songwriter David Westlake then recorded a mini-LP for Creation Records before deciding to get the band back together again, except he didn’t make the call to any of the three musicians who had been with him at the outset.

The new line up would go on to consist of Luke Haines, Alice Readman and Hugh Whittaker, with, at this point in time, only that latter being well-known given a previous stint as the drummer with The Housemartins.

I ended the piece by mentioning that much of The Servants long-deleted back catalogue was hard to track down at reasonable prices and mentioned that I’d be very happy if anyone could find their way to help me out with some tracks.  To my great delight, Anthony got in touch soon after, asking for my postal address to which he sent a CD containing a copy of Disinterest, their lone LP which was released on Paperhouse Records in 1990, and another with a copy of Reserved, a 21-track compilation released on Cherry Red back in 2010.

And it’s thanks to Anthony’s generosity that I’m able to return to The Servants and the one single that was released on Glass Records in 1990, on 7″ and 12″ vinyl.  The lead track was also highlighted in that March 2015 post and seemed to be very well-received by all concerned:-

I still can’t get my head around the fact that I missed out on The Servants back in the day. It’s inexplicable.

5 thoughts on “A VERY BELATED POSTSCRIPT TO AN OLD POST”