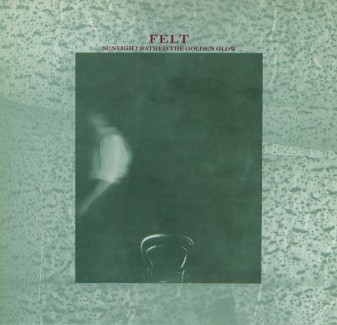 The opening notes of Sunlight Bathed The Golden Glow, a cult single by Felt do, it surely has to be admitted, carry more than a passing resemblance to Just Like Heaven, a huge hit single by The Cure:-

The thing is, the Felt single pre-dates that from The Cure by three years…..did Mr Smith indulge in a little touch of plagiarism or is it mere coincidence?

Sunlight…was the fifth of the ten singles released by Felt between 1981 and 1988.  The band also released ten albums in the time they were together and yes, the symmetry was deliberate.  It dates from 1984, a tremendous year for sophisticated jingly-jangly indie pop songs, with The Smiths, Go-Betweens, Orange Juice, Aztec Camera, Lloyd Cole and The Commotions and Prefab Sprout (just to mention a few!!) all at the top of their game.

Lawrence is joined on vocals by Rose McDowall of Strawberry Switchblade, to the extent that she overpowers him in many places – it doesn’t quite work as well for me as the collaboration with Liz Fraser of Cocteau Twins on the band’s sixth single, Primitive Painters, which came out in 1985.

My preference is for the re-recorded version which appeared later on the album The Strange Idols Pattern and Other Short Stories, released towards the end of 1984. But then again, that’s probably because it is closer in sound to the other bands who were around that year.

The words ‘Sunlight Bathed The Golden Glow’ had actually been used as part of the opening couplet to a 1983 single, one which I have featured previously on the blog, but this gives me the perfect excuse to share it again.

Oh, and if any of you perhaps wish to cast doubt on the fact that Robert Smith ripped off Lawrence, then have a listen to the instrumental track on the b-side of Sunlight…

The case for the prosecution rests m’lord.