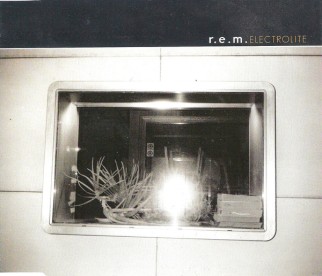 Up until now, both myself and The Robster have been pulling these pieces together weeks and sometimes months in advance. It’s been an absolute joy to have embarked on this particular adventure in hi-fi and having been lucky enough to read what’s coming up over the next few weeks, all lovingly composed by my better half, the quality is going to be maintained.

It would have been last October or November when I would have insisted that the look back at the 31st UK single from R.E.M. would be my responsibility. At which point I got writer’s block that I’ve only managed to overcome as a result of an impending deadline.

Cards on the table.

Electrolite is my favourite single of them all. Back in 2008, when I pulled together my 45 45s at 45 series, nothing from R.E.M. made the cut, but as a preface to the actual series I did say that the five songs which would have taken things up to #50 were, in alphabetical order, :-

This was done to demonstrate just how hard it had been to come up with the final list of 45 singles, all bought at the time of their original release, with only one song per singer/band.

So why do I have such a love for Electrolite?

The writer’s block I feel is an illustration that I have a real difficulty putting it into words.

The first time I heard it was as the closing track to the album. I got a real sense of melancholy as the tune and lyrics just seemed to capture a frame of mind I was in…looking back it was a wee crisis of confidence more than anything, but for the first time in my life I actually felt I was about to take a mighty tumble, with hopes and aspirations for my career suffering a setback. There were also a few things going on with friends that were a bit of a concern, although thankfully Rachel (aka Mrs Villain) was proving to be a rock.

New Adventures In Hi-Fi helped me immensely at the tail end of 1996 – a sprawling, ambitious and hugely unexpected record requiring a high degree of dedication to be fully appreciated. Over an hour in length, it was a diverse and, at times, audacious listen, constantly shifting direction and pace. It was a demanding listen, best appreciated through a set of headphones, whether for the loud rock-out moments or the beauty of the quieter songs, some of which, if developed fully, could easily have delivered another hit as monster as Everybody Hurts.

By the time the album rolled around to track 14, the album closer, I’d often be exhausted and exhilarated in equal measures. And then the sound of what I later learned was a guiro would kick in and the song I cannot but think of as a companion piece to (Don’t Go Back To) Rockville would start to wash over me:-

A few years short of the millennium and Stipe has composed his farewell to the 20th Century, name checking three of the coolest lead men in Hollywood history, backed mainly by a magnificent piece of piano magic from Mike Mills, but on which there is also the most perfect playing of a banjo, a violin and various pieces of percussion to be found on any CD/record that I’ve ever owned.

I think it’s fair to say that I immediately put this song on a pedestal. Any thoughts that it might ever be removed dissipated around a year later when Bill Berry announced he was leaving R.E.M., which means that this holds its special place in history as the last song on the last album recorded by the four-piece.

Here’s another thing I need to mention.

The series of ICAs that this blog has become ‘best known’ for has long given me a real sense of pride. I don’t know how the other composers go about their work, but with almost every ICA I’ve ever written, I think to myself ‘Is this as good a closer as Electrolite?’ Is it a song that makes me want to immediately go back and listen all the way through the album again?’

Electrolite, like the two other 45s taken from the album, came out in cassette form as well as a standard and ‘Collectors Edition’ CD (the only difference being the packaging) on which you could find two live tracks taken from a gig in Atlanta on 18 November 1995:-

As The Robster mentioned last week, the former had been the song the record label most wanted as the follow-up to E-Bow The Letter and the live version does demonstrate both how well it would have sounded coming out of radios and how much it would likely appeal to those whose interest in the band was beginning to diminish.

The latter is one of those tracks on New Adventures that grew on me with each listen. I can give it no higher compliment than it wouldn’t have been out of place on Monster, and the live version captures the band at their best, albeit a long way removed from the Murmur/Reckoning/Fables era of less than 15 years previously.

The fourth track was a remix of one of my own favourites from Monster:-

It was wholly unexpected to read of the collaboration on the sleeve notes of the CD single.  I went in with a bit of fear and expecting the worst, but came out with a smile on my face. As Bones might have said in the early days of Star Trek, ‘it’s R.E.M., but not as we know it, Jim.’

And in this case, that’s something to enjoy and appreciate.

Stats wise, Electrolite reached #29 in the UK singles chart in December 1996. It would be almost two full years before the next 45. The Robster will take your hand and guide you through it, as he will with all four singles from Up.

I’ll see you all again in due course. Thanks for your continued support, and hopefully enjoyment, of the series.