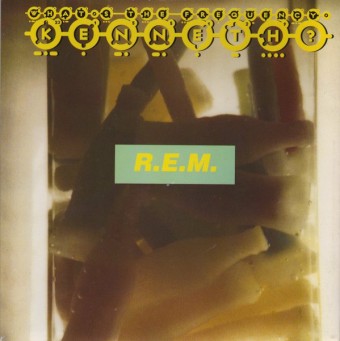 When it was announced that R.E.M.’s ninth album was going to see a return to the rock guitar sound of their mid-late 80s period, I breathed a sigh of relief. Not that I didn’t like the acoustic-led format of the previous two records, but I craved something more from them this time, something different. Little did I know that Monster would be a very different-sounding R.E.M. record – loud, distorted and effects-swathed guitars in abundance, and Michael Stipe sounding more confident than he’d ever been before.

To introduce us to the new album, What’s The Frequency, Kenneth? was released as the lead single on 27th September 1994. The opening chords put a smile on my face when I first heard it. This was exactly what I’d been hoping for. It also helped that the song was immediately catchy, but lyrically obscure as hell. Stipe’s explanation is that it’s about the Generation X phenomenon in contemporary mass media, sung in character as an older critic whose information consists exclusively of media products.

“I wrote that protagonist as a guy who’s desperately trying to understand what motivates the younger generation, who has gone to great lengths to try and figure them out, and at the end of the song it’s completely fucking bogus. He got nowhere.”

The song’s title – quoted in the opening line – is inspired by an incident involving US news anchor Dan Rather. In 1986, while walking to his apartment in Manhattan, Rather was attacked and punched from behind by a man who demanded to know “Kenneth, what is the frequency?” while a second assailant chased and beat him. As the assailant pummeled and kicked Rather, he kept repeating the question.

If you listen carefully, you may notice the song slowing down as it approaches its conclusion. For years, I thought there was a fault with the CD pressing, but I’ve since realised it’s present in all subsequent issues and formats. The reason, according to Peter Buck?

“The truth is, Mike [Mills] slowed down the pace and we all followed, and then I noticed he looked strange. It turned out he had appendicitis and we had to rush him to the hospital. So we never wound up redoing it.”

The song became one of the band’s biggest worldwide hits, and their third top 10 single in the UK, peaking at #9. It was issued in three formats – 7”, cassette and CD (though a 12” was put out overseas). All formats contained a radio edit of Kenneth, which is identical to the album version save the very last line which replaces the lyric “Don’t fuck with me” with “the frequency”. The 7” and cassette both featured a ‘K version’ of the a-side. The ‘K’ stands for that dreaded word Karaoke, so, therefore, it’s an instrumental version!

As you’ll discover, all the singles from Monster contained live songs on the CDs. Many of them were recorded at the same concert which, when compiled, create the almost full set of a show the band played for Greenpeace at the 40 Watt Club in the band’s hometown of Athens, GA. on 19 November1992. I say “almost” as the set opener was played twice and one of the versions appears on a later release, which means for this single, tracks 2, 3 and 4 from the set make up the CD. The originals all appeared on the then current LP ‘Automatic For The People’.

It’s worth noting that fans like myself already had the full concert in bootleg form. Such good quality it was that the same source recording was used for the official release on these singles, as well as the (almost) complete show’s official album release in 2017.

Last year, Monster was reissued as a 25th Anniversary edition which included brand new mixes of every song.

JC and I decided that we would include the new remixes of the singles as bonus tracks in this series. Scott Litt did the remix honours, having long been dissatisfied with the job he did on the original. Some of the new mixes are incredible, and you’ll hear a couple of them in due course. But some don’t quite do it for me. The new version of Kenneth, for instance, removes some of the guitars and takes away some of the original’s uniqueness. Stipe’s vocals have been pushed out front and overall it has more of a live feel. In fact, it wouldn’t sound out of place on the follow-up album New Adventures In Hi-Fi, but I still prefer the original. It’s also 20 seconds shorter, with the closing refrain clipped.