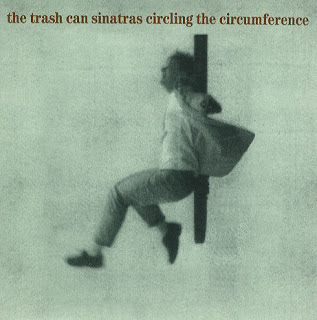 It was back in 1990 that The Trash Can Sinatras released Cake, one of the finest debut LPs from any act ever to emerge from these parts.  It was a real head-scratcher that neither of the first two singles – Obscurity Knocks and Only Tongue Can Tell had failed to find favour with the record-buying public, but then again that was a hard thing to achieve when the songs weren’t getting aired on national radio, although the band did enjoy a reasonable amount of support from stations in Glasgow and West-Central Scotland.

And so in October 1990, Go! Discs made another effort with the release of Circling The Circumference. It was a remixed version of one of the songs featured on Cake, and while it did capture much of what brought the band to my attention (i.e. jangly guitars, clever lyrics and fine harmonies), it struck me as a wee bit of a strange choice as a single with its difficult to decipher lyric and a tune/changing tempo that was kind of reminiscent of some of those that even a band such as The Smiths had difficulty in turning into something other than minor chart hits.

mp3: The Trash Can Sinatras – Circling The Circumference (remix)

I thought it worth helping you out……when you just read the words on paper, you have to marvel at the superb job Frank Reader does in getting them all to fit into the tune.

But everybody is wrapped in a warm embrace
With their arms around the answers
While I’m wrapped up
In my own rigamarole, because

Right or righteous? – I can’t say
Another day, another dilemma
Don’t have the time, thirst, wish, itch or urge to fit
Or that’s my story and I am stuck with it, but

A straight-forward answer
Is out of the question
Why her whole body joins in
In the way she smiles,
But it’s all too much of a muchness for me, and

It’s a song that, over the years, I have grown increasingly fond of, largely down to it being quite idiosyncratic.  It’s one that I am determined to air at the next Simply Thrilled night, should we ever get the chance to get such things going again post-COVID.

Here’s the b-sides and I make no apologies for again using the blog to feature the dreamy cover version of the theme tune from a 60s telly series.

3 thoughts on “THE DIFFICULT THIRD SINGLE…”