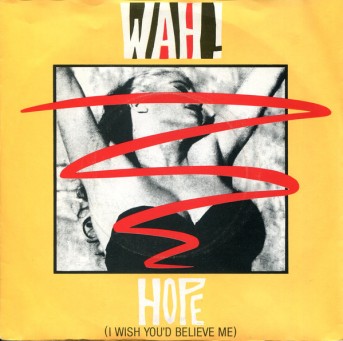 It’s a last-minute change of plan as Khayem‘s suggestion of having each of The Crucial Three feature on consecutive days is a sound one.

It was the follow-up to Story of The Blues and reached #37 in April 1983.  It’s anthemic, albeit at a much slower pace than the big hit, not really ideal for radio play and this lack of exposure probably goes a long way to explaining why it has become so easily forgotten;  Pete would, however, later incorporate the ‘I Wish You’d Believe Me’ refrain into the lyric of Come Back.

Here’s the b-side of the 7″.  It’s another more than decent offering:-

I thought it would be worth concluding today’s offering with a couple of unusual tracks that our main man has been involved in:-

This had been written as a piece of spoken word/music as part of a 1989 show by the modern ballet dancer Michael Clark, later released as a single on One Little Indian Records in 1990. It sees Josie Jones, who had been part of Wah! in the 80s, divulge a list of 64 of things which anger, offend or just annoy her – the list was put together in collaboration with Pete Wylie and the track was produced by Robin Guthrie of Cocteau Twins. It was later remixed by Andrew Weatherall but arguably its biggest exposure came in 2004 when the Manchester racist used it as the opening gambit to his live shows, nicely working up his audience into a fit of frenzy before he and his band took to the stage.

As for the other track, it also dates from 1990. The KLF (Bill Drummond and Jimmy Cauty) were intending to pull together two pieces of work called The Black Room and The White Room – in the end, only the latter would be fully realised. The first part of the Black Room did, however, see light of day via a very limited release with a track credited to The Justified Ancients of Mu Mu:-

It’s a very strange, but typical, offering from the JAMs. The lyric is simply a list of cities and towns located in the north of England read out over over a hard, pounding and noisy techno tune. The narrator is Pete Wylie.

After the KLF had enjoyed huge commercial success with The White Room, It’s Grim….would be re-recorded and re-released with a Bill Drummond vocal, reaching the Top 10 in November 1991.

Watch out for a posting on the KLF on these pages over the next few weeks.