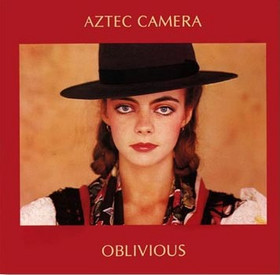 ….that the single version of Oblivious is five seconds shorter than the version which opens up High Land, Hard Rain?

The difference is just after the two-minute mark. The lovely, almost flamenco style of guitar playing has an additional bar on the album version. Something I only picked up when I pulled out the 12″ copy of the single for the first time in years to have a listen on the new turntable.

The single, in its 7″, 12″ and its later re-released form (with a different sleeve) contains one of the greatest of Roddy Frame‘s love songs on the b-side

The other track wouldn’t have been out of place on the parent album either (and indeed, like Orchid Girl, was added when it was eventually issued on CD):-

I will never tire of telling folk that Roddy Frame was just a few months past his 19th birthday when High Land, Hard Rain hit the shops in April 1983. It will always be very near the top of my all-time favourite albums by a Scottish singer or band – indeed there are days when I think it might well be my actual favourite.