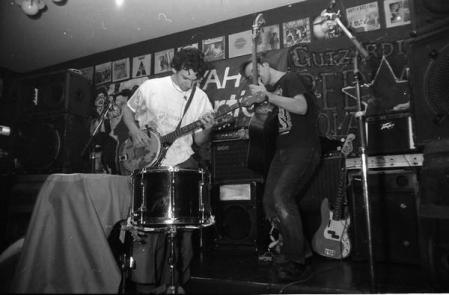 Nyah Fearties were a Scottish music band from the village of Lugton, Scotland, that created a near-unique brand of anarchic modern folk between 1982 and 1995. Combining the rich traditional music and storytelling culture of its native Ayrshire, with a jarring punk ethos, madcap humour and improvised acoustic instrumentation (though usually amplified), the band made a significant contribution to the British folk-punk scene of the 1980s and 1990s.

It often tested live audiences with a feedback-laced aural assault, more akin to experimental rock groups like Velvet Underground or The Jesus and Mary Chain, than an acoustic folk act. In addition, Nyah Fearties were known for utilising all manner of improvised and imaginative musical paraphernalia. Examples of the latter included bashing upturned metal dustbins to create percussion, and the use of an archaic gramophone upon which Andy Stewart records were ‘scratched’ in the style of a hip-hop DJ.

Nyah Fearties have been described as a kind of hybrid between Celtic folk-punk outfit The Pogues, and Glasgow-based industrial music band Test Dept. Yet this is a somewhat misleading analogy. As Stuart Cosgrove noted in the NME (March 14, 1987): “The Fearties are more critical than The Pogues, their Scotland is not a place to be eulogised… it’s a home whose myths are savagely demolished…they use found percussion but stripped of Test Dept’s artiness…”

Nyah Fearties had at its core the brothers Stephen Wiseman and David Wiseman, although the pair were often joined – both in recorded and live performance – by a wide and varying ad hoc circle of guest musicians, friends and acquaintances.

During a 13-year career Nyah Fearties barely emerged from its underground roots, enjoying little or no commercial success while maintaining a loyal cult following. The band did, however, make a live appearance on primetime British television music programme The Tube and hosted a one-off Lugton Loonie Show for BBC Radio Scotland.

I caught them live on a couple of occasions but never took to them. Maybe I was in a bad mood or something for many others out there, including many regular readers, have more fond memories. I’ve pinched some words penned by Craig over at Plain Or Pan as long ago as 2012:-

Nyah Fearties were a brilliant, brilliant 2-man folk/punk band from Lugton in Ayrshire, a place so small and insignificant that Google are still looking for it on one of their own maps, even if The Fearties did their best to put their wee toun there. They had a sound that had obvious reference points in The Pogues and The Men They Couldn’t Hang, but there was a rough and raggedyarsedness to their sound, more no-fi than lo-fi, that made MacGowan and co. sound like a slick jazz funk band from 1982 by comparison. The Fearties were very parochial. Not for them a Scottishness that reeked of purple heather and proud images of Edinburgh Castle, they sang of what they knew. Lugton Junction. Bible John. Sawney Bean. Red Kola. A Sair Erse.

This is part of a tremendously funny tale of a gig back in the very early days in which the author wakes up the following morning with a hangover and the discovery of an injury from being a tad too enthusiastic in the mosh pit. It’s the best thing you’ll read (or re-read) all day.

I’ve one song by Nyah Fearties and it’s thanks to it being included as part of the Big Gold Dreams boxset:-

There’s more stuff out there waiting to be discovered if you so fancy.