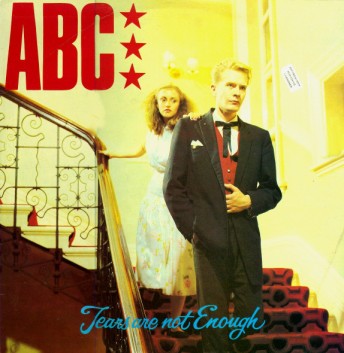 Just when I thought the blog was fading quietly away into obscurity, a few words about the debut single from Duran Duran sparked a lively response, the majority of it on the favourable side.  My special thanks, however, to my dear friend Drew for his pithy ‘fuck off’.  Reading it made me laugh out loud, which is no mean feat these days – partly as I knew that if he had chosen to make any sort of response it would have been exactly along those lines; above all else, when a mate from round these parts tells you to fuck off, he knows that there is likely to be some sort of comeback line rather than taking the advice/instruction to heart.

Which is why the latest entry in this series is another shiny product from another shiny new act from 1981.  It was tempting to go with Spandau Ballet, but that would have been taking the piss (although I do reserve the right to feature To Cut A Long Story Short at some point in the future).  Instead, I’m heading out of London and to the steely industrial city of Sheffield, which arguably, along with Glasgow and Manchester, were the UK’s most innovative and interesting cities music-wise in the late 70s/early 80s.

ABC made it big in 1981, just reward for the efforts in particular of Stephen Singleton and Mark White who, together with Ian Garth and David Syndenham, had been members of Vice Versa, part of the city’s vibrant electronica scene since 1977. They had supported many acts that had gone on to enjoy critical and occasionally commercial success, going as far as establishing their own label, called Neutron Records on which there were two EPs in 1979 and 1980. The latter piqued the attention of a fanzine writer/editor from Greater Manchester by the name of Martin Fry who, having interviewed Singleton and White, then found himself being asked to join Vice Versa on keyboards.

Within a year, having learned that Fry was a superior singer to Singleton, Vice Versa had put him upfront and began to move towards a sound that was more pop-orientated, including Singleton taking up the sax. In late 1980, the decision was taken to change the band name to ABC, stripping back to a trio and then adding a bassist and drummer.

They were snapped up by Phonogram Records, who were so confident of immediate success that they agreed to allow the band to continue to use the Neutron Records imprint. The first 45 via the new arrangement had catalog number NT101, released in late October 1981:-

mp3: ABC – Tears Are Not Enough

It was a pop/soul/funk debut that had barely a trace of electronica. It must have come as a shock to those who had followed Vice Versa through thin and thin with barely a nod to all they had written and recorded the previous four years.  It was bright, breezy, fresh and infectious.

Listening to it now, it offers a template for the pop sounds that would emerge in 1982 – I’m surely not alone in thinking that George Michael was listening and adopted it for the early Wham singles – not forgetting also that the new wave kids who had loved The Jam were picking up on this sort of sound as Paul Weller incorporated brass and keys onto the records and the live shows, and thus laying the foundations for The Style Council.

Phonogram, despite the single going Top 20 after a slow and steady climb up the charts, took the decision to ditch producer Steve Brown and bring in Trevor Horn to add something just a bit more substantial to the sound, including the latest synth technology and orchestral arrangements. The results, the following year, saw hit singles in Poison Arrow, The Look of Love and All of My Heart, as well as the album The Lexicon of Love eventually selling 300,000 copies in the UK and more than 500,000 in the USA.

I think it’s fair to say that the change of producer nailed it for ABC, that and the expensive marketing and promo campaign offered up by the record label. It brought fame and fortune but in the long-run caused friction between the band members with neither Singleton nor White choosing to be part of the modern-era ABC which tours the nostalgia circuits, preferring instead to reform Vice Versa in 2014.

Tears Are Not Enough was a very fine and cracking debut single but it got dwarfed by what followed, with the Look of Love being as near a perfect pop single as there has ever been. I’m still not sure if Horn hadn’t been brought on board whether or not ABC would have been an international success. It’s interesting to note that they struggled to enjoy much success with different producers in later years.

Here’s the b-side to the debut.

This is a gazillion miles removed from the polished stuff on the debut album.  Lots of bass-slapping and funk elements abound… I think it’s fair to say if they had gone down this road in 1982, they wouldn’t have stood out.