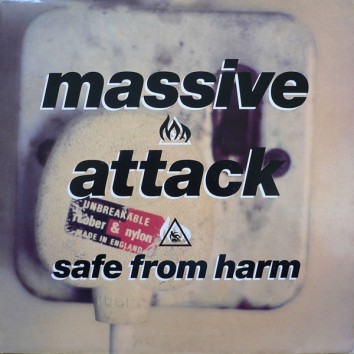 For some reason I always associate this song with Gulf War 1, even though it came out a good three months after that invasion had ended. It’s probably to do with the title of the song and because during the war, Massive Attack were forced by Virgin Records to drop the word ‘Attack’ from their name otherwise they wouldn’t get radio play. I think I assumed that this was the song that was released during Gulf War but in reality it was ‘Unfinished Symphony’ I think. Which seems as good a reason to post that as you are ever going to need.

Anyway, let’s talk about war. That’s a happy and cheerful subject for those of you with a morning head. During the 1990 oil sponsored invasion of Kuwait and Iraq, a few of us wrote to a couple of chaps who were out in the Gulf. They were both local lads, one of whom, strangely enough, went to school with OPG’s brother, and we used to write to them about what was going on in Gillingham, sending them snippets from the local paper about the footballs fortunes (or lack of…) and scandalous gossip that we’d heard.

My mate Richard wrote to a lad who I’m going to call Wayne, I’ve changed his name, he was 21 years old and had been in the army for 3 years before heading out to the Gulf. He was in the Royal Engineers and used to write to Richard about the heat, the lack of alcohol, the terrible food and being spat at in the street. He seemed happy though.

In January 1991 it snowed in the UK, it snowed a lot – I mean those of you in Canada and parts of American and Scandinavia can understandably thumb your nose at that, but for us in the South East of England anything more than 2 inches of snow in a single morning causes society to breakdown. Actual fist fights break out at the Co-op for the last loaf of Morning Pride and thefts of goats rocket so that people can still drink milk.

Anything more than 3 inches and the Daily Mail goes into an apoplectic meltdown and rages about “Snowmageddon” and how it was all Neil Kinnock fault (they actually said that).

Where was I..? Oh yes, snow, Richard wrote and told Wayne about the snow and how we’d all found an old car bonnet in some woods at a place called Darland Banks in Gillingham and we were using the car bonnet to charge down the slopes of the Banks at breakneck speed before crashing through the hedge at the bottom onto the road. It was deliriously funny.

Normally Richard would get a response in a couple of weeks, but he got nothing this time, February came along, the snow all melted and the war ended in a 3 all draw. Still no response from Wayne. Richard sort of forgot about him – I mean we were 15 and 16 years old and we probably thought we had better things to think about.

March comes along and one morning I am out delivering copies of the Medway Times and there on the front page is a story about a Gulf War Soldier from Medway, aged 21, who lost both of his legs in an incident involving a mortar bomb and an army jeep. He’d been driving the jeep to try and assist some of his colleagues who had become stranded in a dangerous part of town. They’d come under attack and the result of that is what is documented above. It also pointed out quite angrily that this chap was being denied the services that he deserved.

I mean a Conservative run service treating people badly, who’d a thought it.

Of course, it was Wayne, you’ve guessed that. Richard, was deeply upset about it and decided to do something about it. He tracked him down and with the help of his parents and the local paper and about a thousand other people. Collectively they managed to get him some support, they got him some specialist housing, they got him some work. A women cleaned his house for him for free for two years, just because she could.

I’ve met Wayne, I’ve spent a good deal of time with him, through Richard, and he’s lovely. He is totally humbled by what people did for him. He still goes to see Gillingham on a regular basis, in fact the last time I saw him was down at the stadium, although that was some time ago. He also set up and runs a charity for people like him who have suffered horrific injuries through warfare. He does that in his spare time.

Wayne now works in IT, he is married with children (one of whom is in the navy, not that its relevant). Richard was his best man at his wedding. Which I think is lovely.