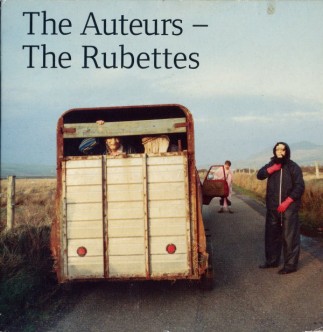 A few months later, the Baader Meinhof LP was released, a period of time wonderfully recalled in the pages of Bad Vibes, including the revelation that someone high up in Virgin Records, the parent label of Hut Records with whom Luke Haines had a contract, sent this in a fax to David Boyd, the head of Hut:-

“I would like to remind you that Virgin Records did not sign Luke Haines to make political statements. He is signed as an entertainer.”

In response, Boyd sanctioned a photo call at the Munich Olympic stadium where, in 1972 at the adjacent Games Village, 13 Israeli athletes had been killed after a terrorist attack. Haines really was testing everyone’s patience and understanding.

The Baader Meinhoff album gets mixed reviews in that it was loved and loathed in equal measures, best summed up by UK broadsheet newspaper The Guardian stating that Haines had wasted some of his best music on an impenetrable subject matter. No single is released to accompany it…. but there was a one-sided etched single given away free with vinyl copies of the album:-

mp3 : Baader Meinhof – I’ve Been A Fool For You

1997 proved to be a quiet year, but it was at this point in time that Haines formally hooked up with John Moore and Sarah Nixey to create Black Box Recorder.

Chrysalis Records signed the band, something which Hut Records seemed OK about, and in 1998 there were two flop singles – Child Psychology and England Made Me – before the release of a poorly selling album, also called England Made Me.

At the same time as this was happening, The Auteurs had come back together again….I’m guessing it was to fulfill a contractual obligation for a fourth album, as the reasons aren’t quite ever explained in Post Everything, the second volume of Haines’s memoirs, published in 2011 and covering the period 1997-2005. There are a number of aborted efforts at getting the recording process going, but eventually, from August – October 1998, things take shape.

The crazy thing is that the subsequent results yielded next to no reviews when the LP, How I Learned To Love The Boot Boys, was released in July 1999, but those who were paying attention, rightly recognised it as a masterpiece, such as this from Michael Hubbard in musicOMH, a London-based online magazine:-

If you’re going to be influenced by the music of decades other than the present one then you may as well allow that music to emphasise your own work rather than making your own music emphasise someone else’s.

Bjorn Again are great, no doubt about it – but they emphasise Abba. Who would they be otherwise? It has, in the recent past, been something of a conundrum; lots of ’70s disco music revivalist tripe has been scribed and has spawned comeback careers for everyone from Martha Wash to Burt Reynolds.

All great stuff – I’m sure the ’70s were fun at the time and Boogie Nights was a refreshing film – but really, mes fruits, this is the ’90s. Why live in the past? Why not just learn from it and improve upon it? The case for evolution has not been stronger since Charlie D popped his clogs and finally we have, in the shape of Luke Haines, a man prepared to lead the fightback.

Haines last graced the Albums shelves with his side project, Black Box Recorder’s England Made Me, which I loved immediately. The atmospherics of that record are transferred to How I Learned To Love The Bootboys and given some spices to further improve the flavour. Haines claims this record to be twelve singles; “maybe not twelve hits”, says the nihilist, but we see – and hear – what he means immediately.

At once a personal album (1967 was the year Haines first looked upon the world) and a fusion of myriad styles (Asti Spumante and Your Gang Our Gang, for instance), there are tracks that remind one of everything from The Sex Pistols to Ziggy Stardust, Gary Numan to Blur, yet I suspect that this eclectic record conjures different bands for each listener, depending on what they’ve heard before. Haines refines Numan’s atmospherics, he plays Johnny Rotten subtlely, he uses one or two Bluresque riffs rather than songloads and everything somehow works. In fact, in works bloody brilliantly.

Although every one of these songs shrieks CLASS!!! at the eardrums, stand-out tracks must surely be Asti Spumante, Your Gang Our Gang, Johnny and the Hurricanes, The Rubettes and title track How I Learned to Love the Bootboys. If you don’t yet own this album then you are missing out. Go buy.

In recent years, more writers haved belatedly heaped praise on the album, especially when it was reissued in 2014 as a 3xCD expanded edition in which the original 12 tracks were joined by an album of b-sides and rarities, along with a live album from November 1999, recorded at the London School of Economics, on the occasion of The Auteurs final UK gig.

There was one single taken from the album, complete with two new b-sides  All three tracks are very listenable:-

The a-side featured backing vocals from John Moore and Sarah Nixey, thus providing a neat bridge between what had just come to pass and what would prove, the following year, to be the commercial high point of Luke Haines as an entertainer.

I’ve previously said that Black Box Recorder wouldn’t feature as part of this series, and I’m keeping it that way. The series will continue, running through early into the new year, with this idiosyncratic look at the solo career of Luke Haines, very little of which has seen the release of singles or EPs, but something in the region of 12 albums. You’ll be pleased to learn that chaval will be lending his talents to this venture…..

PS : I might be away oh holiday just now, but I was reliably informed that an old friend was intending to come out of the woodwork today.  If my intel is good, then clicking here should do the trick.