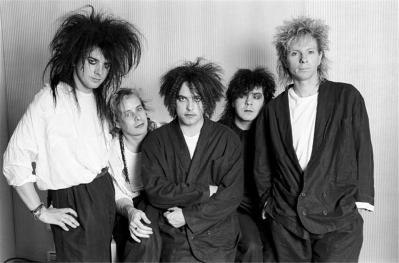 It was exactly six years ago today that I had a quick look at In Between Days by The Cure, together with the exceptional b-sides made available on the 12” vinyl here in the UK:-

It proved to be a very popular posting with a number of folk coming in to offer their own positive thoughts and views via the comments section. I thought it would be worth marking the anniversary with a look at the follow-up single, a track that was lifted off the album The Head on The Door:-

There were very significant changes made to the version that was released as a 45 in September 1985, namely the addition of a squeaky door and brass section.

It’s one of the catchiest and memorable releases of the band’s entire career and deserved a far better fate than stalling at #24. It also came with a top-quality b-side, offering further evidence that the band were very much in their ‘imperial phase’ (copyright, Echorich)

A jazzy, fun-filled extended version, coming in at over six minutes in length, was also put together, demonstrating that Robert Smith & co. were as far removed from the gloomy goths that many in the media were lazily portraying them:-

The single was also accompanied by one of the most memorable promotional videos of all time. Here’s the description offered up by wiki:-

Written and directed by the band’s frequent music video director Tim Pope, it consists of the band all inside a wardrobe on the edge of a cliff at Beachy Head.

Following the musical scheme of the song, which builds up instrumentally, all the band members are inside the wardrobe, but not playing instruments. Boris Williams is clapping to the beat, keyboardist Lol Tolhurst is playing a very small, handheld keyboard, and Porl Thompson on the top shelf is plucking a comb to represent the short high sounds in the song. Bassist Simon Gallup does not play, and instead appears to be tied up. Tim Pope later revealed that Gallup had a light bulb in his mouth to create a “lit from within” feel, and the cloth was there to hide the wire.

The promo continued to be aired long after the single had come and gone from the charts, leading to the situation that Close To Me, over the years, would come to be arguably the most instantly recognisable of all their songs.

Fast forward to October 1990 and the news that The Cure intend to issue an album of remixes of some of their most popular songs alongside some re-recordings of the older material, with an eye on having them fit for the floors of indie and alt-discos. A month prior to the release of the album, and a remix single was issued as a taster:-

The remix treatment came courtesy of Paul Oakenfold and was engineered by Steve Osbourne, both of whom had helped Happy Mondays into the charts earlier in the year.

A slightly longer version was issued on 12”:-

It would have been really easy just to re-heat the old promo to go with the remix, but they came up with something of a genius idea. Here’s wiki again:-

There is also a music video for the version of the song that appeared on Mixed Up. The video picked up where the original video ended, with the wardrobe crashing down the cliffside and sinking to the bottom of the sea. Robert exits first and is attacked by an octopus (seen playing the horns later in the video). After his struggle, the other band members try to flee as well, and are attacked by a starfish. The video ends without any of the band members reaching the surface, though they could see a boat overhead.

The remix version of the song, despite coming out only five years after the original, reached #13 in the UK singles chart, reflecting the fact that the late 80s/early 90s were the high-point, sales-wise for the band (the next studio album, Wish, released in 1992 would provide them with their sole #1 LP).

Close To Me, in either of its versions, still sounds fresh and exciting and the live renditions in the shows of 2019 inevitably received just about the biggest cheers of any night.