The Just Joans will be appearing on the Saturday run through of Scottish singers/bands in the not too distant future, but a dig through some vinyl singles that had been bought in 2017/18 but left unkempt in a plastic bag for over a year, unearthed a gem of a 45 which just has to be shared.

They formed in 2005 and were, as the main protagonists have always admitted, an initial shambling effort of a band who rarely, if ever, took themselves that seriously. As time went on, and they began to attract an increasing fan base from well beyond their natural habitat of Glasgow and its neighbouring south-easterly towns in Lanarkshire, they took things up a few notches and began to release singles and albums that went beyond rudimentary.

The band has always centred around the siblings David and Katie Pope. Indeed, for much of the past near 15 years, the duo have taken to the stage as The Just Joans but there has been an increasing use of other musicians to flesh out their sound, both on record and in the live setting. David is a very talented and observant writer, penning witty and wry lyrics that are more often than not from the perspective of one of life’s eternal losers, albeit someone who never loses optimism or hope. He’s the first to admit that he’s not blessed with the most classic of singing voices but his delivery, always in the most direct of local dialects, fits perfectly with the subject matters in hand.

Katie’s role in the band has grown immensely in recent years. She’s well known in Glasgow as a visual artist, with her works often selling for substantial sums of money to collectors and fans alike. She’s painted many of the sleeves for band’s singles and albums, bringing to mind the work of Jenny Saville for Manic Street Preachers – an ugly side of reality but with the brightness of colour. Katie has taken on more vocal duties in recent years, either on lead or performing duets with her brother, providing not only a very fine contrast but enabling many of the songs to be seen through the prism of an unlucky and sad but optimistic female.

The band’s most recent album was You Might Be Smiling Now, released on Fika Recordings in late 2017. It was their third after Last Tango In Motherwell (2006) and Buckfast Bottles In The Rain (2012). Their preference has been the EP with seven of them released between 2007 and 2013.

You Might Be Smiling Now is a fabulous record from start to finish. There might just be too many local references and in-jokes to have it make perfect sense further afield, but at long last the previously used description of them being ‘the missing link between The Magnetic Fields and The Proclaimers’ made sense. They were now a six-piece, featuring Chris Elkin (lead guitar), Fraser Ford (bass guitar), Doog Cameron (keyboards) and Jason Sweeney (drums) – and yes, it’s the same Fraser Ford who performs with Butcher Boy – and while the song themes were still, for the most part self-deprecating, the playing made for a great listen, regardless of whether or not a listener understood the cultural or geographical references.

There was one single lifted from the album. It’s the most ambitious piece of music The Just Joans have tackled, with cellos, horns and female backing vocals added in for good measure.

Katie’s wistful delivery of the tale of someone coming to the realisation that they are no longer of an age to dance the night away, and indeed the horror that their preferred look is now that of a middle-aged aunt rather than a stylish teen, is one to make everyone of a certain age, regardless of gender, smile in recognition. The fact that it is delivered to a tune that just makes you want to get up and dance, with its chorus in particular making a passing nod to 60s Motown, only adds to the joy:-

And the 7” came with a gloriously evocative painting by Katie. 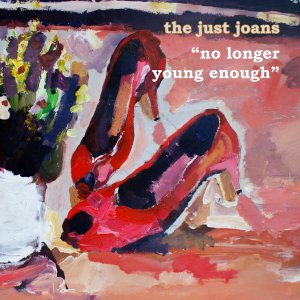 And a more than half decent b-side:-

mp3 : The Just Joans – Breakfast For Our Tea

It’s indie pop at its most indie and its most pop. What more could you ask for?

I’ll be back with more of this lot in a few weeks.

2 thoughts on “GETTING OLD JUST AIN’T NO FUN”