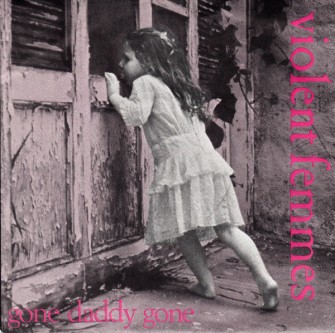 Gone Daddy Gone was the debut single by Violent Femmes back in 1983. It also appears on one of the finest of all debut albums.

It’s a reminder that many of the songs were written by Gordon Gano when he was an angtsy teenager, one for whom life wasn’t going smoothly or according to plan. Especially when it came to landing himself a girlfriend. His pain is even more palpable from the fact he actually had wooed the girl of his dreams, only for her to call it off and disappear out of his life, to where, he says, he can only guess.

But then again, given some of the other crazy thoughts and lyrics that Gano would bring our way in subsequent releases, it could well be the case that the reason his love has gone away is that he has killed her and put her in a shallow grave or the likes…….

It’s a tremendous debut, sung with just the right sound of puzzled desperation over a tune which, as its highlight features a xylophone solo. Not too many tunes in the history of rock’n’roll can make that sort of boast.

Also worth noting that bluesman Willie Dixon would later on, long after the single was released, receive a co-writing credit, thanks to the lyrics including a verse from his 1954 song “I Just Want to Make Love to You” which was originally recorded by Muddy Waters but is probably most famous in the UK for its use in a Diet Coke advert in 1996 with a vocal by Etta James.

The UK version of the Violent Femmes debut 45 came with a superb b-side, one which is arguably even better than the single, and a track which can also be found on the debut album:-

Copies of this 45, which came out jointly on Slash and Rough Trade Records, are quite rare and the only one for sale on Discogs is looking for in excess of £50. (and no, I don’t own a copy!!)

7 thoughts on “IT REALLY WAS A CRACKING DEBUT SINGLE (26)”