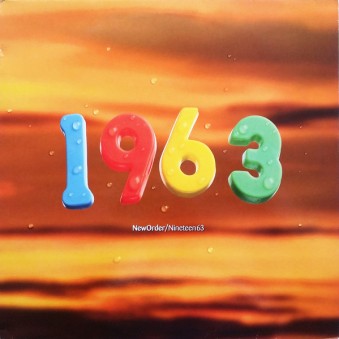 The b-side to True Faith, the 14th single by New Order which was released in July 1987, was 1963. It was, and remains a magnificent b-side – a pop song with a lyric that wasn’t mundane and was also open to a number of interpretations – with both tracks being composed specifically for inclusion on the Substance compilation which, more than 30 years on is the album I’d recommend most to anyone who was new to the band and looking for a decent introduction.

All that was back in the Factory days when the release of a new single really was something to look forward to, even if on occasion the contents were a wee bit of a letdown. London Records had already shown how cynical they were prepared to be by lifting four 45s from Republic in 1993, but worse was to come when the label realised the band weren’t intending to get back in the studio anytime soon.

In November 1994, (the best of) NewOrder was put into the shops just in time for the Xmas market. A ridiculously lazy effort, it was mostly the 7″ versions of singles from 1985 onwards with four tracks given the remix treatment. I’ve already featured the abysmal True Faith 94 and it was released as a companion single to promote the ‘best of’ album. Just when you thought it couldn’t get any worse, the post-Xmas effort came via the release of another single….

The thing is…..this was different from the mix that had been put on the ‘best of’ compilation. The new single was a remix by Arthur Baker and in itself was a really decent effort in that the song was stripped back a fair bit and was reminiscent in many ways of Regret. But it all seemed so pointless and greedy, especially when anyone wanting to get the full set would need to buy a least 2 x Cd singles and a the 12″ vinyl.

CD1 came with a slightly edited version of the Baker mix, together with the really appalling version that had been put on the ‘best of’ LP

and two further mixes that really had fuck all to do with the original song:-

CD 2 offered the full length Baker remix, a vocal version of Let’s Go (which had originally appeared as an instrumental on the soundtrack to a long forgotten movie called Salvation, released in 1987), another pointless remix of Spooky and another outing for the Shep Pettibone remix of True Faith.

The 12″ single consisted of four mixes of 1963, these being the two non-Baker efforts on CD1 and two further variations on them.

All of which sold in sufficient numbers to take the single to #21 in the UK charts.

This is where I really began to get disenchanted with New Order.  I did, and still do, have time for what Arthur Baker did to 1963, but the other mixes were a disgrace.  Years later, I did get one of the other b-sides courtesy of its inclusion in the Retro boxset.

What happened next almost beggared belief.  With still no material coming from the foursome, London decided that a further compilation was required and in August 1995, the tills bulged as fans parted cash for (the rest of New Order)…..here’s wiki:-

…the compilers brought together a selection of older remixes alongside new specially-commissioned remixes. The remixes of “Blue Monday”, “Confusion”, “Touched by the Hand of God”, “Bizarre Love Triangle”, “Age of Consent”, “Temptation” and “Everything’s Gone Green” were all new radical reinterpretations. The four singles from Republic are represented with remixes that had previously appeared as B-sides. The oldest mix included was Shep Pettibone’s take on “True Faith” from 1987.

The compilation was released on Compact Disc, cassette and double LP. Each version has a different track listing. Cassette editions include an additional mix of “Temptation”, while limited editions of the CD and cassette came with an additional bonus disc/cassette of “Blue Monday” remixes. To promote the album, “Blue Monday” was once again re-released. The single was backed with remixes that appear on the bonus disc of the limited edition CD. The version of “Blue Monday” released was the Hardfloor Mix, dubbed “Blue Monday-95”, and reached #17 in the UK

It was all beyond a joke now…